On the day that Romney formally declared his candidacy in Stratham, N.H. by calling President Barak Obama a failed president, the big question on everyones mind was Wheres Sarah? 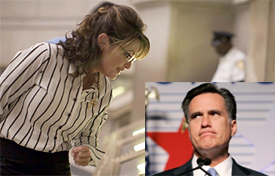 The Sarah Palin mystery tour turned up in neighboring Boston, where Alaskas half-term governor took a break from visiting historic sites like Bunker Hill and Old North Church and autographing copies of the Constitution to take a swipe at poor Mitt.

Sarah then packed up her bus and headed for the Granite State with a contingent of mainstream reporters in pursuit, panting for a delicious news crumb or two.

While the mainstream media play out the guessing game of will she or wont she, Sarah is getting the last laugh. At age 47, Palin is a political baby. There is no urgency for her to run against and get destroyed in the process by President Obama.

Her so-called One Nation Tour to educate and energize Americans about our nations founding principles in order to promote the fundamental restoration of Americans (chart its progress at sarahpac.com) can roll on for years (God help us all). Its the greatest way for Palin to promote her brand, and cut her disapproval ratings while keeping above the political fray.

My guess is that Sarah got an earful from Donald Trump, who successfully played the media on whether he would run for president. Egads, the Trumpster is considering a return to the political game.

A word of advice to Palin: next time you have a hankering for pizza in New York, dont swing by a chain like Famiglia Pizzeria. There are hundreds of locally owned pizza joints throughout the Big Apple.

Also, ditch the knife and fork