The media have had great fun in ridiculing Sarah Palin for saying that Paul Reveres great ride was to warn the British about those pesky colonists rather than to rally patriots in colonial Massachusetts. 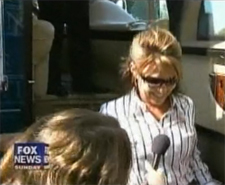 Its Palin who may get the last laugh.

The half-term Alaska governor told Chris Wallace of Fox News yesterday that she didnt mess up her history.

Sarah had it partly right, according to Andrew Malcolm, political columnist at the Los Angeles Times. He wrote today that Revere did warn the British after he was captured. Revere did indeed defiantly warn them of the awakened militia awaiting their arrival ahead and of the American Revolutions inevitable victory. Palin just had the horse part wrong. The warning came from a horseless Revere.

Palins critics say her Fox News spin was a poor effort at damage control, a bid to portray Revere as a supporter of the future Second Amendment right to bear arms. That may be a stretch, but there is no use in underestimating Palin.

Dean, however, doubts that Palin is going to get the Repubican nomination. He warns Democrats not to make the same mistake that Republicans made in underestimating Bill Clinton.

We know how that turned out.