Weiner even joked about his own PR issues.

"Do you need to talk to a professional PR-type person to give u advice?" read an email from Weiner to the woman, Ginger Lee. "I can have someone on my team call. (Yeah, my team is doing great. Ugh.)" 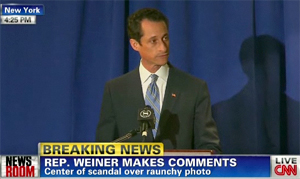 After Weiner's bombshell revelation at a press conference on Monday afternoon, the PR advice, opinions and criticism are overflowing. Here's a sample of the commentary directed toward the contrite congressman:

Chris Lehane, PR consultant and former spokesman for Clinton and Gore, in the San Francisco Chronicle:

"The New York City press corps, the Washington press corps, the national press corps and the social media press corps were all following...and he shouldn't have been in this position from a crisis communications perspective to begin with. If last Monday, he said, "I sent an inappropriate picture, and I'm completely responsible,'' it would have been bad. But that's not a seven-day story, and an ethics investigation -- and people wondering if the career is over."


The social media snafus are endless, and a lot of high-profile people have been making them. Politicians, athletes, actors, musicians  everyone has had their fare share of mistakes. And its not just limited to people. Companies, such as Chrysler and Red Cross, have been victim of careless Twitter mistakes when employees published their own tweet to the company handle by mistake.

Jeff Jarvis regrets giving Weiner the benefit of the doubt on national TV:


Im trying to pull back from my personal embarrassment and stupidity at giving this shmuck the benefit of the doubt and see the lessons here about our age of publicness. There are many. It fascinates me that Twitter provides such an easy way for people to connect for *any* purpose.


I dont know if Congressman Weiner is guilty of anything regarding the photo and the tweet and the college girl. But I think the verdict is in on his recent reputation/crisis management efforts. I think its a textbook PR case of how not to handle a controversy.

Fraser Seitel, who weighed in on the scandal on odwyerpr.com last week, sees three options in a post for Fox News: