PRSA chair Rosanna Fiskes announcement of a proposed $30 dues hike for PRSA members was a mockery of the democratic process.

She said flatly that if members want any justification for the hike they wont get it from her or any national leaders.

If they (Assembly delegates) dont seek you out, seek them out and let them know how you feel, she said in a Q&A on the dues jump.

Rank-and-file members have to put their foot down.

Their Assembly delegates have been bought, sold and delivered by national leaders and staff by one means or another. Leaders/staff hide behind the delegates. 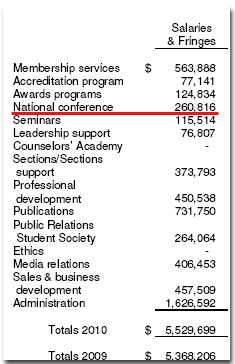 Even the delegates are in hiding since there has been no complete published list of them since 2005. Even delegates themselves cant get the list. Inclusion is on a voluntary basis.

Here's what members should demand:

1. Stop lying about the finances. Biggest lie of all, even bigger than dues booked as cash, is the claim that only $260,816 in staff time was required for the 2010 national conference. This is 4.7% of staff costs of $5,529,699, a huge understatement of true staff costs.

Former PRSA treasurers assure us that roughly half the staff spends half its time on the conference or a real cost of up to $2,764,849. Some staffers work all year on it and others are engulfed by the conference in the final two months. Twenty-five went in 2010 to the meeting in D.C. In the 1970s, when such meetings were just as big, 5-6 staffers went. Local volunteers were used.

The conference, where leaders walk around with a row of ribbons on their chests, only brought in $1,554,430 in 2010. Total reported conference costs were $929,294, a huge understatement.

2. Rank-and-file members must tell national leaders and staff if you dont talk to us, youre not getting a nickel. In fact, dues could be cut in half if most of staff moved from New York and left a midtown library and meeting place like many other associations have done.

3. Leaders must immediately give the 81% non-APR members the right to run for national office. The board and Assembly are unrepresentative of the vast majority of members. APRs are not only undemocratic in denying such rights but are in violation of the UAB code that says APR must never be used for competitive purposes or the APR can be removed.

4. Practice "highest standards of accuracy and truth" with Society financial reporting which is in violation of FASB rules for deferring dues income. At least show how properly booked dues income would change the balance sheet. Members have been misled for too many years by these financial reports.

5. Again provide transcripts and recordings of the Assembly. Either broadcast the Assembly live or tape it and make it available the next week.

6. Publish complete list of Assembly delegates including phones and e-mails and make them available via one e-mail. Any delegate who does not want this exposure should resign.

7. Make the complete membership list available via a PDF including the geographical and corporate indexes.

8. Convert Tactics and Strategist to online only, saving hundreds of thousands. Stop living in the past (1950s and 60s) when PRS had the only monthly magazine (PR Journal). There is now an internet deluge of writing about PR topics.

9. Demand that the contract of COO Bill Murray be revealed to the membership and whether he is to be given a new two-year contract. In 4.5 years, he has yet to address the NY chapter. If he has addressed any New York group, I am unaware of it.

10. Acknowledge that the Society has lots of competition in PR tutorials such as seminars and webinars and withdraw from that activity. Under the tax code, the Society should not be in competition with what any tax-paying business is doing.

11. Start a real "PR for PR" program that includes staff or elected leaders speaking before business and other groups. Drop the Business Case for PR. Dont leaders know that giving someone the business is shafting them? When you are all business it means you are cold, officious and hostile. PR is supposed to bring ethics to business, not more business. Leaders and staff are on the run not only from members but the publica poor advertisement for PR.

12. End efforts to block coverage of the Society by the press. Reporters either should be able to join or given complimentary memberships with full access to all Society communications. Stop the "war" on the press which flies in the face of the Societys Code under which members pledge to treat reporters and others "fairly."

13. Hire a half dozen members and/or PR pros at h.q., ending the association/legal/marketing culture that squashes PR values of conciliation, cordiality and cooperation.