Rules are rules, but cmon. Should an airline charge soldiers returning from Afghanistan $200 to check-in a fourth bag that they thought was eligible to ride for free?

Thats what Delta Airlines did to soldiers traveling through Baltimore Washington International on a flight to Atlanta and then on to Fort Polk, Louisiana. 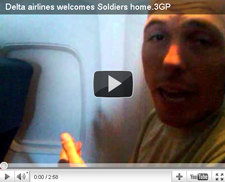 Where was the common sense?

The social media savvy military vets, however, had the last word, posting their sad saga on YouTube. The video received nearly 250K hits after it went live yesterday.

The soldiers believed that under military travel orders they were entitled to four free bags. Delta maintained that only three bags ride for free. It collected a total of $2,800 from the soldiers before becoming the target of YouTube scorn.

Good business model, Delta, said the narrator who closed the piece with Not happy. He had just interviewed a soldier who was charged for his weapons case that contained gear used to protect myself and Afghan citizens.

Delta posted a blog June 7 to announce the immediate revision of its baggage rules for military personnel on traveling orders in first and business class. They can now check in five bags for free. Economy travelers are allowed four free bags.

Blogger Rachael R, who is identified as Deltas social media manager, promised that Delta is going to work with the individual soldiers to make this situation right with each of them. In other words, the soldiers are going to get their money back.

The carrier regrets that this experience caused these soldiers to feel anything but welcome on their return home. We honor their service and are grateful for the sacrifices of our military service members and their families.

Delta hopes the policy change reflects the true respect we hold for our service men and women and again demonstrate our appreciation as both a company and as individuals who benefit from the freedom our troops defend.

Rachael is an Army wife and 12 year Delta employee.

The YouTube video, which had comments calling for a Delta boycott, has been removed by its user. Case closed.

Now about those cramped seats and lousy leg room?