Lets hear it for Oxford Economics, which has found a silver lining in the Great Recession that has ravaged the U.S. and Europe.

It believes the Great Recession combined with leaps in technology (cloud computing, social media, mobility) will accelerate a powerful third wave of capitalism that will lead to extraordinary wealth creation especially in the seven emerging countries of Brazil, Russia, China, India, Mexico, Indonesia and Turkey. That E7 Group will own a greater share of world GDP than the G7 collection (U.S., Canada, France, Germany, Japan, U.K. and Italy) by 2020. 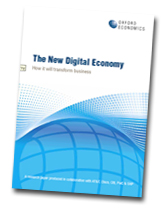 Oxford makes its case in a study, "The New Digital Economy: How It Will Transform Business," released June 7. It was sponsored by AT&T, Citigroup, PwC, SAP and Cisco and gathered input from executives at more than 360 companies.

Economic growth and technology are inextricably linked, according to the report.

"Current economic conditions are fostering investment in technology as emerging markets ramp up their demand for technology to fuel growth and advanced markets seek new ways to cut costs and drive innovation. This becomes a virtuous circle as digital technologies drive consumer income and demand, education and training, and efficient use of capital and resourcesleading to increased economic growth, particularly in emerging markets."

The survey says 1.8B people or 27 percent of the worlds population currently use the Internet. That will grow to 2.8B (38 percent of population) by 2015.

Oxford Economics was founded in 1981 as a commercial venture with Oxford University to provide economic advice, forecasts and analytical tools to international organizations.