Video news releases, for decades a staple of the PR repertory, are used less and more carefully by newsrooms in the wake of Federal Communications Commission fines and a damaging report in 2006 by a PR watchdog, the FCC said in a lengthy report on the state of the media June 9. 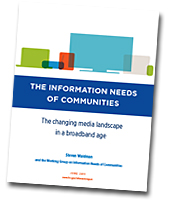 Brian Schwartz, former director of client solutions for Synaptic Digital, told the FCC in an interview last fall that his company, the former Medialink, does not use the term video news release much any more but that the content is still used because it is free and TV news resources are limited. Schwartz left Synaptic in November.

Doug Simon, president of New York-based D S Simon Productions, told the FCC that VNRs have become irrelevant in the wake of third-party video and the near-death experience of TV News. VNRs arent a relevant communications tool anymore, he told the FCC via email. I dont have anything else to add.

Simons firm produced a VNR spot that the FCC said was misused by a Minneapolis Fox affiliate in 2006 and led to a fine earlier this year.

Former Hearst VP Fred Young told the FCC that that proper use of VNRs with identification is acceptable for news rooms. Today if you clearly identify where [the VNR] came from, I have no problem with it, he told the FCC. It is the people who are taking it and passing it off as news that bothers me.

Kevin Benz, news director for News 8 Austin, said the station uses VNRs from the state that are related to outdoor activities, but they are fully vetted and the source is identified on air and online. If there is something that we feel is overly promotional, or only promotional, we dont air it, he said.

Others are more wary.

Steve Schwaid, director of news and digital content for an Atlanta CBS affiliate, said the station does not use VNRs unless there is a drug recall and its the only video available. But we do not take VNR handouts, period, he said.

Hearsts current guidelines call for identifying VNR video used, but its stations do not use VNRs as a whole, according to the FCC report. A news director for FOX 13 Salt Lake City said the station burns courtesy of into the videotape before its even reviewed to prevent VNR footage from being used as B-roll for another story without attribution.

The FCC notes that some argue that enforcement actions against VNRs violate First Amendment rights. FOX has a case pending in defense of its VNR usage arguing that it did not violate sponsorship ID rules because it was not paid to air the VNR content. The News Corp. property also says the FCC encroached on its discretion in making editorial choices.

The FCC also detailed examples of pay-for-play arrangements between advertisers and local TV news stations, adding that stations that disclose VNR sources often fail to do so in reports posted to their websites. The commission even suggested the creation of a unified online public file which would serve as a searchable record for which stations use sponsorship arrangements.

Another notable PR reference in the FCC report is the statistic that 12.4 percent of 251 TV news directors said they are already doing or considering doing product placements within newscasts.