Dictatorships are able to remain in power because they surround themselves with a cadre of "cronies" who are paid off one way or another and block the "people" from organizing, said an op-ed piece in the June 10 New York Times by Bruce Bueno de Mesquita and Alastair Smith. Professors at New York University.

However, if the dictators run out of money they are apt to lose support of their cronies and face rebellion, said the professors, who have authored "The Dictator's Handbook." 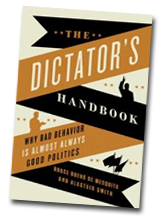 This is now happening at PR Society of America, where leaders are saying its webinar/seminar business is under intense competition, it can't find any new sources of income, and it has cut expenses to the bone. It wants a $30 dues increase, the first rise in 10 years.

Some major chapters are rebelling against the hike, saying they have a hard time renewing members even at $225.

Members just "drop out" and "cherry-pick" meetings they want to attend, paying the non-member rate, say the chapter leaders.

The crude and cruel policies of the accredited (APR) members vs. the New York chapter and New York PR/press community have come home to roost.

The APRs, who comprise only 19% of the 21,000 PRSA members, have had full control since the mid-1970s. They will not let non-APRs on the board, on the nominating committee, or on the Ethics Board. None were allowed on the 2009 bylaws re-write committee.

Their policies, as well as the staff-driven insistence on keeping h.q. in expensive New York, have cost the Society untold millions.

PRSA would have moved from New York in the mid-1980s had not the entire staff, with the exception of COO Betsy Kovacs, threatened to quit en masse. Instead of courting the huge number of New York PR pros and communicators of all stripes (upwards of 20,000), the APR-run board moved h.q. from midtown to midtown South in 1987 and all the way downtown in 2004.

New Yorkers have been denied use of the PR library and meeting place they had enjoyed since the 1950s.

The New York chapter was booted from PRSA h.q. in 1992 on the ground of "lack of space," but was never invited back although current offices have 22,000 sq. ft. for about 50 staffers.

Lacking a meeting place or any help from the h.q. staff, and snubbed endlessly by national leaders (no elected CEO has addressed the New York chapter in more than 20 years), the chapter has languished at 700 members or so for decades. Competitor New York Women in Communications soared to 1,400+.

Raw evidence of the APRs' distaste for New York is the selection of Philadelphia for the national conference for both 2007 and 2013 while neglecting New York, which set the record for attendance in 2004 (4,000).

Attendance was boosted by the appearance of Donald Trump and the huge resident PR community. PRSA also did not have to pay for travel, room and board for the 25-35 staffers who go to a conference. Service firms saved a lot of money by not having to transport exhibits.

Having the conference in New York every year (like many groups do) and moving most of h.q. out-of-town while leaving a midtown facility, are the answers to the Society's money problems -- not a dues increase. Dues should be lowered.

The APRs are especially angry at the New York chapter because only 47 of the 677 current members are APR. That multiple-choice test, which involves no writing or creativity, earns nothing but the disdain of New Yorkers.

Defying the wisdom of the founders, who decreed that directors may not succeed themselves, the APRs now let them serve indefinitely four years at a clip, one year off, four more years, etc. Chair Rosanna Fiske is on her fourth trip to the board.

The PRSA webinar business brought in $772,198 in 2010 and was the second biggest generator of funds after the annual conference.

But in recent months PRSA has been giving away webinars to non-members as well as members, enlisting suppliers as sponsors.

Thomson Reuters is the sponsor of 20 free webinars.

The Society also has 52 webinars/teleseminars and "on demand" webinars that it sells mostly at $150 for members and $250 for non-members.

The free webinars have angered some of the members who ask how can the webinars be described as a "member benefit" when they're free to anyone?

Dictator-like policies have dominated for decades at the Society causing some members to believe it's hopeless to oppose them.

Smith and de Mesquita say Robert Mugabe, for instance, has been able to stay in power in Zimbabwe because the "natural resource wealth" of the country gives him enough money to keep his cronies in line.

But financial problems including high unemployment in countries such as Egypt, Syria, and Morocco have led to defections in their cronies and popular rebellions.

When the money runs out, as it did in during the French and Russian revolutions, rebellions take place, the NYU prof say. A "substantial decline in American aid" touched off the uprising against Hosni Mubarak, they write.

PR Society staff and leaders are now faced with a double financial whammy -- membership growth has virtually stopped and its webinar/seminar business is beset with endless competition.

PRSA has said its only alternative now is to raise dues since a committee found that the Society "already employs all significant means of revenue streams and that no material opportunities are being overlooked."

PRSA claims it has economized by cutting $1.5M out of the operational budget but this did not include any cuts in staff pay/fringes which rose 3% in 2010 to $5.52M.

Also not cut was the "Leadership Rally" that took place over the weekend in which up to 137 Assembly delegates, section chairs and district chairs received not only $550 each towards expenses but five free meals (based on the 2010 agenda).

PRSA rewards its "cronies" not only with titles and awards but cash. Leaders pitching the dues hike note that the favors it can give chapters including stipends for speakers and other purposes.

A group of 10 or so senior members working at h.q. would know how the money is being spent. But only two or three PR pros are allowed on staff and they are under tight control of staff/board.

Account and job leads can also be provided. The Counselors Academy has noted that "Where can I find a PR firm?" is one of the most frequent questions h.q. receives. Such inquiries or RFPs are not posted on the PRS website.

A "mini-revolt" took place last year waged by the "Committee for a Democratic PRSA" (CDP).

It collected 450 signatures (laughably, 150 of them were "anonymous") but didn't make a dent in the dictatorship.

PRSA staff/leaders wouldn't give the CDP its list of Assembly delegates, who should have been its chief target, nor allow use of the 21,000 e-mail address book of members.

Tactics Online, the supposed "news" vehicle of PRSA, never mentioned the CDP. Most members probably were not aware of its existence.

Blocking information is a hallmark of dictatorships. The populace feels weak.

Journalists are not allowed to see the financial reports and audit of PRSA. Questions about the reports, in which "net assets" are described as "reserves," are ignored.

The PRSA policy of booking dues as cash is in violation of Section 5.46 of the Financial Accounting Standards Board.

The two-thirds APR Assembly quickly dispensed with the CDP's bid to let non-APRs run for office. It would not allow a roll call vote that was requested by a delegate. Secrecy is another hallmark of dictatorships. Transcripts of the Assembly have been withheld since 2005.

There is a current revolt at the International PR Assn. and this might motivate some PRSA members to copy it.