A year-old hoax image purportedly showing a McDonald's policy of charging a fee to African-American customers resurfaced over the weekend, given new life by Twitter and providing a PR headache for the fast food giant. 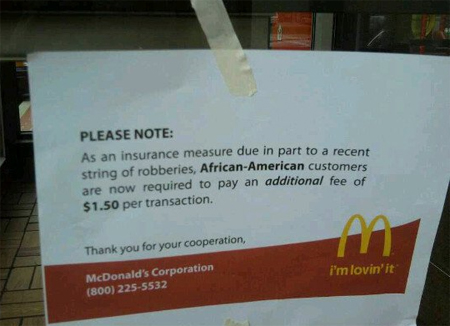 As the photo was tweeted around the 'Net and hit the dreaded (or beloved, depending on the situation) "Trends" list, McDonald's sent out its own Twitter dispatch in an attemp to stop mounting digital outrage:

That pic is a senseless & ignorant hoax McDs values ALL our customers. Diversity runs deep in our culture on both sides of the counter.less than a minute ago via CoTweet

A day later, the image continued to spread, so McDonald's tried tweeting again:

Later in the day, the fast food chain's director of social media gave a statement to Mashable -- saying essentially the same thing -- which was also sent out via Twitter.

Gawker.com noted the manipulated photo first appeared on a blog in June 2010.

Its renewed life provides a formidable horror scenario for PR pros and social media managers as the potential for diffused or old brand attacks to crop up a year later and spread much faster than any statement or denial can slow it down. Of course, the idea that anyone skilled with Photoshop can whip up a character assassination plot in minutes is also reason to reach for the Tums.