Okay, she did out-dazzle a drab collection of tired retreads and the nutty Herman Cain of Godfather's Pizza fame. But that grouping is the best that the GOP has to offer until Rudy throws his helmet into the ring. 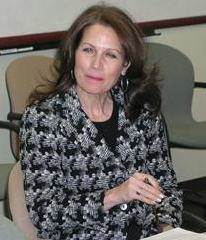 How about a big announcement from New Yorks former mayor tied to the upcoming of the 10th anniversary of the 9/11 attacks? Would that be a little opportunistic?

The Minnesota Congresswoman, meanwhile, scored PR points by using the debate to actually make some news: Bachmann officially announced her candidacy and turned down a bid for re-election to Congress.

Vowing to repeal Obamacare and trashing the Environmental Protection Agency were red meat issues that Bachmann deftly tossed to her Tea Party constituents, who are skeptical of the conservative bona-fides of front-runner Mitt Romney.

Bachmann is too raw and inexperienced (two completed terms in Congress) to top a Republican ticket, plus she has 23 foster kids to worry about.

But No. 2-to-Romney looks doable.

Think of Bachmann as Sarah Palin with brains. Last night, she surprised many with reasoned opposition to U.S. involvement in Libya. That really shouldnt have been a shocker since Bachmann recently joined the House Intelligence Committee to build foreign policy know-how. Thats more homework than Palin did during her downtime following the 2008 debacle. Betcha Sarah thinks Libya is some place in Europe.

The Minnesota Representative promises to add a big dose of entertainment value to a Romney run. The nation would be bored to tears with a Mitt/Tim Pawlenty team.

Imagine Bachmann going head-to-head with Joe Biden. She would also gain media coverage just for the expectation of a repeat of one of her past bloopers.

My favorite was Bachmanns crazy comment that President Obamas trip to India cost $200M to support an entourage of 2,000 staffers and 34 battleships. One would think that you cant make that stuff up. Michele, however, came through.

A Gallup poll released today shows that Bachmann enjoys name recognition of 62 percent, up 10 points from last month, among Republicans. Thats only topped by Romney, Palin, Gingrich and Ron Paul. She ties Romney when it comes to a positive intensity score.

After Mondays debate, this blogger is jumping off the Newt bandwagon, which he joined only after "The Donald" dropped out, and hitching a ride with Bachmann as the candidate most likely to shake up the GOP race.