Cohn & Wolfe is supporting client Asia Pulp and Paper as the Indonesian company deals with an ongoing Greenpeace campaign accusing it of damaging rainforests on the island of Sumatra that gained traction this week when toy giant and APP customer Mattel said it would review its policies. 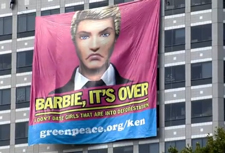 Its renewed effort to pressure customers of APP led toy giant Mattel to say last week that it would create a sustainable procurement policy and freeze purchases from APP after activists draped a large banner depicting a Ken doll over Mattel's El Segundo, Calif., headquarters declaring "Barbie, It's Over  I don't date girls that are into deforestation."

C&W picked up the global PR account from APP after Weber Shandwick declined to defend the business in a review last fall, following Greenpeace's initial broadsides against the paper pulp producer.

Wal-Mart and KFC have also been targeted by Greenpeace, and Nestlé, Kimberly-Clark, and Unilever preceded Mattel in vowing to make changes to procurement with respect to sustainability.

APP fired back at Greenpeace last week for the PR stunt and challenged the group to reveal its research and analysis that led to claims APP uses tropical hardwood fibers from endangered habitat in its products.

"Greenpeace may think citing popular children's toys is a cute way to get attention for its extreme position," said a statement from APP's PR unit. "However, we believe it's irresponsible to play on the emotions of children and their parents to rehash old, discredited allegations in order to attack the industry of a developing nation."

In the U.S., Greenpeace is also urging the Federal Trade Commission to investigate a recent APP marketing campaign touting its support of tiger conservation efforts which the environmental group said is a "token" gesture.

"APP's subsidiaries and sister companies are clearing the remaining habitat of the Sumatran Tiger  93% of their habitat is already gone," said Daniel Brindis, forest campaigner for Greenpeace, which said it found tropical hardwood fibers in APP-produced packaging.

APP has blasted the attack and burnished its environmental credentials while noting its harvesting of wood for paper products is done legally and responsibly.

"It is our responsibility to adhere strictly with [Indonesian] laws, not to satisfy the unreasonable and groundless demands of a foreign-based NGO," said a statement from APP's PR and stakeholder engagement units, and C&W.

The company said it is sticking to a goal of 100% sustainable plantation pulp by 2015 and is pressuring Greenpeace to share its scientific analysis and research that formed the basis of its allegations.

Mattel said in a Facebook statement June 8 that it has launched an investigation into the deforestation allegations.

"While Mattel does not contract directly with Sinar Mas/APP, we have directed our packaging suppliers to stop sourcing pulp from them as we investigate the allegations," the company said.