The maligned Broadway spectacle "Spider-Man Turn Off the Dark" officially premiered Wednesday and faced its first official round of reviews today, months after critics tore apart the show. 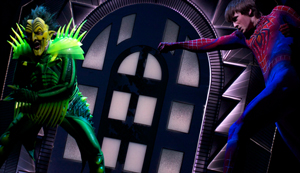 The production, which was delayed several times and overhauled more than once, counted among changes its PR representation last year when Broadway PR firm Boneau/Bryan-Brown stepped down from the account in July as O&M became Spidey's agency.

O&M, led by longtime theater publicist Rick Miramontez, has the unvenviable task of sifting through this week's reviews -- the NY Times called it boring today, a notable improvement from February's savage review -- and promoting the show.

The PR run-up to Wednesday's premier included a national evening news interview by NBC's Brian Williams with musical composers Bono and the Edge from U2, part of an apparent plan to highlight the show's flash and celebrity-studded roots over, say, plot or character depth. (I hate to think of what got bumped from the evening news for that segment.)

O&M fired its first post-opening salvo today with a press release noting its star-studded premiere and claiming that critical praise from outlets like USA Today, The Associated Press, New York Daily News, and MTV is pouring in for the production.

The show's website and social media feeds are playing up the celebrity angle as well. We couldn't find any links to reviews from those official outlets, but the PR fortunes appear to have turned, at least for now, as Spider-Man's backers hopes to recoup the reported $70M invested in the show.