Wednesday was a good and bad day in Congress for guys whose last name begins with the letter K.

Representative Dennis Kucinich did himself proud by forging a bipartisan group of ten members who filed a suit challenging President Barack Obamas right to wage war on Libya without Congressional approval. 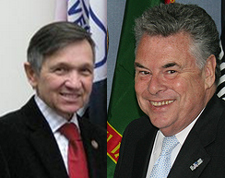 In the complaint, Kucinich and allies argue that Obamas policy that he may unilaterally order combat operations in any country to protect the universal right of foreign citizens is capable of repetition in countries other than Libya.

They single out Syria, which in fact has bombarded its citiesjust as Col. Gaddafi threatened to do before U.S. intervention. The President is said to be in violation of the War Powers Resolution.

Congressman Peter King didnt have such a good day as he rolled out the second round of Muslim bashing hearings.

The Long Island Republican presided over the sideshow of the threat of Muslim-American Radicalization in U.S. Prisons. In his opening statement, King took an advance shot at critics. While repeating the old chestnut that the overwhelming majority of Muslim Americans are outstanding Americans, King went on to say:


The first radicalization hearing which this Committee held in March of this year was met with much mindless hysterialed by radical groups such as the Council of Islamic Relations and their allies in the liberal media personified by the New York Times.

It seems like old Peter has a chip on his shoulder.

King must have more serious things to do.