If Leo Durocher was around today, he would be steaming about the civility survey released by Weber Shandwick, Powell Tate and KRC Research finding that Americans rank tone or level of civility (cited by 88 percent of respondents) over prior experience (84 percent) in determining their choice in next years presidential election. 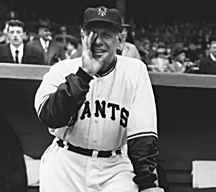 The fiery baseball manager of the Brooklyn Dodgers, New York Giants and hapless Chicago Cubs is remembered for his Nice Guys Finish Last quote. [Editors Note: my favorite quote from The Lip is the one about God watching over drunks and third basemen.]

The survey does rate position on specific issues as the No. 1 factor (cited by 92 percent) in voting for President. It is followed by civility-related the way the candidate treats and deals with people he or she disagrees with (90 percent). Leo also said that if he was playing third base, and my mother was rounding third with the run that was going to beat us, I'd trip her. Oh, I'd pick her up and brush her off and say, 'Sorry, Mom,' but nobody beats me.

The survey from the Interpublic companies finds a third of Americans believes incivility is part of the political process. Trashing opponents is only going to get worse, according to 85 percent of the surveyed. Republicans accept incivility more than namby-pamby Democrats by a 41 percent to 21 percent margin. Independents weigh in at 31 percent.

Fingered by 35 percent of respondents, the media get the blame for political incivility. The gang at Rupert Murdochs Fox News (51 percent) takes top honors when it comes to uncivil mainstream media outlets. That's up a solid nine percent from last years polling. Fox is followed by MSNBC (37 percent), CNN (32 percent) and the New York Times (29 percent).

If Leo was around today, he would be a Fox TV-watching, Republican screaming about President Obamas Muslim cronies doctoring his birth certificate. He also would be attacking water coolers at Wrigley Field as the clawless little bears are having another lousy year, fighting the Houston Astros for the cellar of the National Leagues Central division, which is fitting because Leo finished his career as skipper of the `Stros.