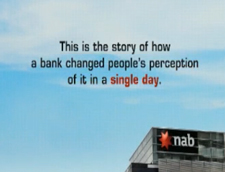 The campaign, created by Clemenger BBDO Melbourne, was kicked off by a tweet intended to look accidental and sought to portray an NAB break-up from the countrys three other large consumer banks in the wake of the global economic crisis, as Australian consumers have suspected the top four of fixing fees and stifling competition (video/details of winning campaign).

The PR jury was led by Fleishman-Hillard president and CEO Dave Senay, who said 105 entries were shortlisted for honors. Ten won Gold, 13 Silver and 15 Bronze Lions.

Senay told reporters after the winners were announced that whether agencies are focused on PR or advertising isn't as important "in an era where the labels matter less and less."

The Australian firm, estimated the PR campaign, which also included full-page break-up letters in newspapers and videos of NAB bankers breaking up with other banks, generated $5M in earned media in one day.

The Kaplan Thaler Group, New York, won a Bronze Lion in the crisis category for its rollout of the new Aflac duck voice.