PR Society of America, which has blacklisted this reporter for years, including an hour-long delivery of that policy by chair Gary McCormick and COO Bill Murray on March 19, 2010 in my own office, has condemned blacklisting of reporters as unethical. 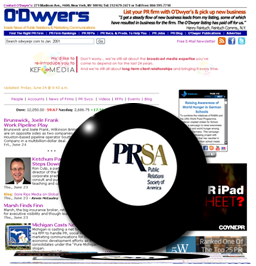 The Society statement, sent by Keith Trivitt, who joined PRSA as associate director of PR last October, said, The blacklisting of reputable media (or the threatening to do so) because of negative reviews or commentary is most certainly not what comprises ethic PR practices

Business should provide accurate information in a forthright manner to all media outlets that request such information, said Trivitt.


Yann Sees Pay for Play
VP-PR Arthur Yann, commenting on the Redner incident, illogically saw it as a pay for play offense and condemned that.

No doubt aware of the Societys own blacklisting of ODwyers, Yann told E-Commerce Times and other media that requiring favorable reviews as a payment for exclusive or early access to a new game or service is not a practice that the Society condones.

The Redner incident has nothing to do with pay for play. That involves the media demanding money from PR firms or clients for use of materials. Its roots are in the payola scandals of radio.

Whats going on with the Redner episode is a PR firm threatening to stop dealing with media deemed to be too negative. Thats blackballing which is exactly what PRSA does to the ODwyer Co.

Blackballing is blocking something, i.e., someone from joining an organization. Admissions committees had a black ball that could be dropped into the voting box. One vote could bar someone from membership.

No reasons for the ODwyer blackballing are ever spelled out in word and definitely not in writing.

Trivitt, who recently joined the Society as associate director of PR from RLM PR, is in charge of its advocacy program.

Said Trivitt: Threatening to punish publications that do not write favorable reviews for a product or service goes against a core tenet of ethical PR regarding the protection and advancement of the free flow of accurate and truthful information that is essential to serving the public interest and contributing to informed decision making in a democratic society.

Yann, in an e-mail to this writer last year, threatened permanent banishment from the PRSA Assembly if any of several rules were broken, including taking any pictures of the Assembly or even the Assembly meeting room before it started, interviewing any delegates during the Assembly (or even during a break in the Assembly, it seems), or recording anything (although there had been no ban on recording or picture-taking at any previous Assembly).

Society representatives, including Trivitt, chair Rosanna Fiske, and Yann, are conducting a publicity campaign for the Society in which any PR transgressions by individuals or companies are denounced as unethical and failing to live up to the Societys Code of Ethics.

Fiske was recently quoted in numerous media in the U.S. and abroad condemning Burson-Marsteller and staffers John Mercurio and Jim Goldman for trying to place negative stories about Google for client Facebook without identifying Facebook as the sponsor of the stories.

Murray, accompanied by 2010 chair Gary McCormick, repeatedly told this writer that the Society had chosen not to deal with you and it had this right as a private organization (even though its first name is Public).

No concrete reasons were given either verbally or in writing. References were made to us being too negative and intent on obtaining payment for the more than 50,000 copies of ODwyer articles that were sold without permission by the Society as part of its info pack service.

A form of print Google, the service collected articles from scores of media under 1,000 topics and sold 3,800 of the packets yearly. The business, in operation from 1980-1994, was halted as soon as this writer outed it.

A previous formal boycott against the ODwyer Co., voted by the 1999 board, was rescinded at the first meeting of the 2000 board.

The press boycott caused a member to charge the board with five violations of the Society Code. Rather than try the charges, the board voted to end any enforcement of the Code. A new toothless Code was created at a cost of nearly $200,000.

Seitel had rapped the toothless codes of PR groups including PRSA and the Council of PR Firms.

Both had been sadly silent in the wake of four recent ethical cases  the former head of the L.A. office of Fleishman-Hillard receiving a jail sentence; an employee of the IR firm Market Street Partners being charged with abuse of inside information by the SEC; Greenpeace charging that Ketchum and Dezenhall Resources stole confidential information for clients Dow Chemical and Sasol North America, and PR pro Lanny Davis belatedly resigning as spokesperson for Ivory Coast strongman Laurent Gbago whose death squads terrorized the country and infuriated the international community.

We agree with Seitel. The PR Society is very choosy about who it criticizes and it never criticizes itself or any of its leaders.