Is it ugly or effective PR? You decide.

BeautifulPeople.com and its U.K. PR firm have offered a tenuous explanation as the dating site which lets members vote on whether new members are attractive enough to join has been accused of staging a PR stunt by purging thousands of "ugly" members from its ranks. 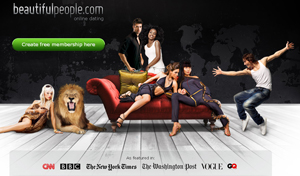 The tide went out on the site's already shallow waters when it explained the large-scale deletion of new members with this press release:


LONDON, June 20, 2011 /PRNewswire-Asia/ -- BeautifulPeople.com, the dating and networking community exclusively for good-looking people, has been hit by a virus that allowed 30,000 "ugly" people to invade the site.

Normally, everyone must pass a strict "rating" stage, where existing members vote on whether new applicants are beautiful enough to join the site. But the rating module was brought down last month, allowing anyone - regardless of looks  to be accepted.

Greg Hodge, managing director of BeautifulPeople.com, said: "We got suspicious when tens of thousands of new members were accepted over a six-week period, many of whom were no oil painting." ...

Golden Goose handles the site's PR and said 30,000 of 37,000 people who signed up when the system was down were rejected.

The episode was deemed a PR stunt by a media-savvy company by IT blogger Graham Cluley, who questioned why the site was handling the hack internally without informing any computer security experts.

"It's a fantastic piece of chicanery, of course, designed to boost awareness of the dating website, get them many thousands of pounds of free publicity with little risk of damage to their reputation," wrote Cluley.

This is a website, after all, that boasts its media coverage -- CNN, New York Times, Vogue -- prominently on its main page.

The U.K. tech site PC Pro said it was sent photos of the rejected members by the PR team. "Perhaps more worryingly than a maybe/maybe not hack is that the sites spokeswoman sent me photos of some of the so-called 'rejects' for publication (Im not that mean)."

The site has 700K members and 5.5M have been rejected, according to the BBC.