Nurses are heading for Federal Hall tomorrow in what promises to be the high point of their Make Wall Street Pay for the Damage Done to Main Street campaign. 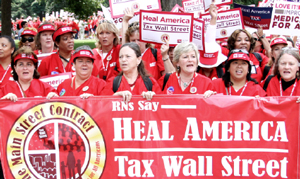 They will push for a tax on the speculative transactions that nurses blame for the financial meltdown and economic carnage that devastated communities throughout the U.S.

The National Nurses United campaign claims that billions can be raised through a sales tax on derivatives, credit default swaps and other exotic transactions similar to the levy that already exists in the U.K. Thats pie in the sky stuff.

The cause may be noble, but there's no way Republicans in Congress are going to punish their dear friends on Wall Street. Its a tough enough fight to keep the 2010 Dodd-Frank financial reform regulations on the books. Mitt Romney yesterday blamed Dodd-Frank for creating the uncertainty that is creating a credit crunch for Main Street small business owners.

The nurses action comes as Wall Street cries of hard times ahead. Pay cuts are in the works. Goldman Sachs, Barclays Capital and Morgan Stanley are pruning staff this year to cope with the European debt crisis and the new regulatory environment.

Andrew Ross Sorkin, in todays New York Times, says many of those cries on Wall Street are nothing more than crocodile tears triggered by the sleight of hand masterfully played by investment houses last year in an effort to curry favor from an angry public. Bonuses were pared in 2010 as a nod to the fury and outrage from the financial crisis, he wrote. And then voilà, salaries were quietly raised to compensate for the lower bonuses. This new pay structure is having the unintended consequence of perverting Wall Streets traditional strategy during tough times.


In the past, banks could cut variable costs like bonuses when profits slipped, rather than hand out pink slips en masses. Now fixed costs like salaries make up a higher portiion of their expenses. So layoffs are starting to look more attractive,

In other words, basic greed is why Wall Street is now forced to cut jobs. Nice work, Andrew.

The nurses can do some good tomorrow. According to the NNU blog, they will take a shot at the media for their focus on the seedy rather than the needy in our communities or the greedy who put them there.