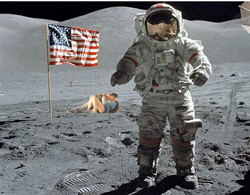 The kissing couple at the center of an enigmatic photo of Vancouver's riots last week has taken the next step on the road to cashing in on the moment -- hiring PR counsel.

The Herald Sun of Australia reports that Aussies Scott Jones and Alexandra Thomas are reconsidering an earlier pledge to not cash in on the exposure and have hired an entertainment-savvy PR firm in that country to explore options.

Jones and Thomas have given several interviews, including NBC's "Today" in the U.S., in the wake of the photo -- taken by Getty's Rich Lam -- which is spreading virally around the web.