While there are a few PR winners in the now-legendary $150K bar tab run up by the Boston Bruins, the team is probably not among them. 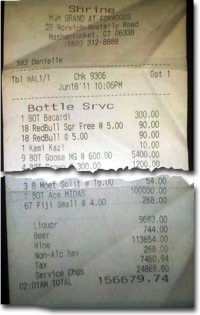 Those PR flames were fanned by Foxwoods Casino and its PR team at Boston-based Elevate Communications, which put out a press release June 19 announcing the Bruins' barstool bonanza in great detail from a day earlier, an attempt to one-up a much-hyped (and equally expensive) celebration by basketball's Dallas Mavericks a week earlier.

Photos of Bruins team members dancing at the Shrine nightclub at Foxwoods and of the receipt were offered up by Elevate.

The Boston Globe (which ran the photos) reported that it took the team four hours to run up the bill, although players have been left to explain that the booze was gratis.

"We are very disappointed at something like this," the Bruins' star defenseman Zdeno Chara told the Globe. "I'm not sure how it got out. That was our first and only night we had as a team together. We went out to Foxwoods to have a normal good time, nothing crazy..."

Meanwhile, Amstel Light, the light beer brand of No. 3 global brewer Heineken, rolled the PR dice with a clever parlay today by offering free booze to the lone Boston Bruin player who ordered the single Amstel beer on the receipt.

While the team has deflected minor sparks of outrage at its bacchanalia, Amstel seized on the PR moment of another to get its own shot of PR.

"We want to reward the Bruin who ordered the Amstel Light," the company said in a press release, "to recognize him for making a great decision."