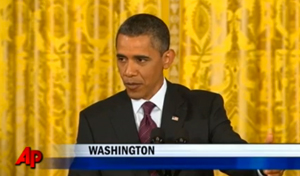 After todays presser, President Obama, who has drawn comparisons to FDR and JFK, can now add HST to his pantheon of presidential role models. Okay, as my good friend media trainer Virgil Scudder noted the President didnt come across exactly like give `em hell, Harry. It was more like give `em a strong dose of heck, Barry. Thats the style of too-cool-for-school Obama.

Well take it as long as the GOP gets the message of the impending financial disaster looming, if they dont bend on taxes. The President sounded like the only adult at the negotiating table surrounded by a bunch of whining GOP brats not willing to give an inch as the August 2 doomsday deadline nears to raise the debt limit for the 17th time since 1993 or go bust.

The Economist (June 25) says a U.S. technical default would convulse global financial markets and drive away future foreign investment in U.S. securities for a long time. Americas debt is supposedly the worlds safest, backed by trustworthy courts and an unrivalled capacity to raise taxes and print money, noted The Economist.

Will the sheer stubbornness of financial wizards like Mitch McConnell, John Boehner and Eric Cantor forever destroy that image of the U.S. as the worlds economic bulwark?

Obama scolded Republicans for being more interested in tossing red meat to hard-core supporters and jockeying for Fox TV facetime than working for the common good. Robot-like GOP demands for more cuts in federal spending without raising anything that smells like a revenue-booster (e.g., hike in taxes on the rich, elimination of breaks for oil companies and corporate jets) are not the stuff of negotiations.

The President put in nicely: It would be hard for Republicans to stand there and say that the tax break for corporate jets is sufficiently important that were not willing to come to the table and get a deal done. Ouch.

Obama urged the Republican majority Congress to show leadership. Hopefully leaders at a certain point rise to the occasion and do the right thing for the American people, the President said. Call me naive, but my expectation is leaders are going to lead.

Obama should take his own advice. Todays bully pulpit performance was a good start. He should hit the road and warn the American people of the Republican willingness to throw away Americas global reputation for financial stability for cheap political gains before it is too late.