The White House demonstrating its command of social media scene today by hosting the first-ever Twitter Town Hall at which President Obama fielded questions that were tweeted about the jobs and the economy. 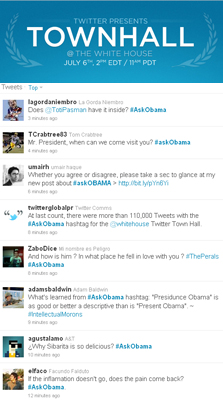 Theres a nice range of tweets. The ACLU wants to know, "What is your administration going to do to stem the tide of discriminatory, anti-immigrant laws coming out of state legislatures? While the Heritage Foundation countered, You said your stimulus plan would keep unemployment below 8%. Do you agree that was a trillion dollars wasted?

Crafty House Speaker John Boehner turned the tables on the president, retweeting a question from Obama ally, AFL-CIO, "Where are the jobs?

While the Commander-in-Tweet makes great strides in the social media world, a big question looms: Wheres Joe B?

This blogger was happy to hear Vice President Joe Biden pre-empt the President by officially entering TwitterWorld on July 4. One expected candid Joe would be great fun.

Remember that time Joe admitted that Hillary Clinton would have been a better running mate for Obama, whom he described as bright and clean good-looking guy. How about when Joe muttered that the healthcare reform law is a pretty big f ------ deal before an open microphone?

Sadly, the vice presidents office staff is keeping Biden on a short leash. So far, there have been two tweets. The first thanked the troops for their service and the second announced a White House meeting tomorrow with Senate leader who believe America cannot continue to kick can down the road. Tame stuff.

Amy Dudley, deputy press secretary to the VP, blogged on Independence Day that staff was going to oversee the Twitter action. She promised to keep Bidens 18K-plus followers in the loop on goings-on in the Office of the VP -- from the West Wing to the Eisenhower Executive Office Building to Jill Bidens office to the Naval Observatory and on the road. I would trade that in for original tweets from No. 2. Unmuzzle Joe! Let Biden be Biden. Biden's fan club is getting restless.

What possibly could go wrong?