Bivins is one of the 13 authors who joined the Authors Committee Seeking Restitution from PRSA in 1995 after the ODwyer Co. purchased 11 of its information packets at $55 each and found more than 1,100 pages of articles that were being copied and sold without the permission of the authors.

That only scratched the surface of the improper copying since PRS was advertising packets on 1,000 subjects and selling about 3,800 yearly netting $60,000 or so. It was an early form of print Google.

The practice was carried on from 1980-94 when an ODwyer expose stopped it cold. 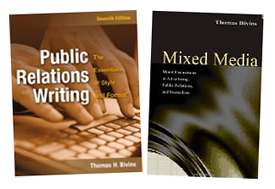 Among the materials copied was a 17-page chapter from the Handbook for PR Writing by Bivins.


UofO: Look at Your Bedmate
We want the UofO, including Bivins, who is the John L. Hulteng Chair in Media Ethics professor, as well as Tim Gleason, dean of the School of Journalism and Communication, and UofO president Richard Lariviere to take a look at the ethics of the PR Society, whose national board member and potential chair is now on the faculty of the school.

Hulteng, who joined UofO after ten years as a newspaper reporter and became J dean, wrote seven books on journalism and journalism ethics. He died in 1996.

Plagiarism is one of the cardinal sins of academia. Professors and researchers are super careful about attributing ideas to others who may have expressed them previously. Anyone who violates this rule is hammered.

The massive, unapologetic and unredeemed theft by PRS of the intellectual property of dozens of authors, including two other PR professors (Bill Brody and Dan Lattimore of Memphis State) is typical of the truculent, overbearing behavior of the Accredited (APR) members who have controlled the Society since the mid-1970s.

Their philosophy was rid New York h.q. of any PR pros which was quickly completed. Only one PR person was on the staff in the 1980s and early 1990sDonna Peltier.

This lack of PR pros not only led to the massive illegal copying but the tossing of hundreds of Silver Anvil entries during the 1980s because minor rules were broken such as the three-inch binder rule.

PRS, unlike the rest of the world, measured binders from the outside where it is 3.25 inches. So unfortunate entrants who purchased three-inch binders got their entries returned with no explanation.

The uncaring staff, disregarding the many hours that go into an entry, kept the tens of thousands of dollars of entry fees.

The ODwyer Co. exposed this abuse and member Lou Capozzi obtained a change in the rules.


Exhibitors Squashed
Another typical behavior was the way PRS dealt with exhibitors who wanted better treatment at the annual conference.

Nearly 50 of them, almost all based in New York, founded the PR Services Council and sought an exhibit area close to the general sessions as well as other improvements such as classes on the exhibit floor to explain new technologies.

Another goal was having more of the conferences in New York since almost all the exhibitors were based in or near there and would save greatly on shipping costs.

New York also had by far the biggest audience of communicators.

This annoyed the APRs who are overwhelmingly from cities across the U.S. [Only 47 of the current 650 members of PRS/NY are APR].

So in 1995 the APRs closed the exhibit hall. Exhibitors were flabbergasted, saying there is no such thing as an industry conference without an exhibit hall.

COO Ray Gaulke delivered the news to the Council on Jan. 19, 1995, saying PRS lost money on the hall and that he would seek one or two overall sponsors such as IBM or Intel.

This would certainly be less trouble for the Society than dealing with nearly 50 exhibitors.

No such sponsors were ever obtained. The Council, deprived of its mission, disbanded. PRS restored the hall in 2000. The service firms, having learned their lesson, did not organize again.

Also closed was the free literature table where publications and suppliers who couldnt afford a booth were able to distribute copies of their publications and flyers. This had annoyed the APRs who raised the fee from $100 to $450, greatly reducing the number of participants.


Current Abuses of APRs
Wed like ethics expert Bivins to tell us what could possibly be ethical or moral (a word used in his book on ethics) about the following practices at PRS:

--Barring more than 80% of members since the 1970s from running for national office because they are not APR.

--Failing to enforce the UAB Guidelines that say Accreditation must never be used for competitive purposes. (A majority of the UAB board is PRS members).

--Withholding from members since 2005 a complete list of delegates to the Assembly. No list at all is currently available.

--Withholding since 2005 a transcript of the Assembly.

--Barring reporters from recording or taking pictures of the Assembly.

--Cancelling the printed directory of members as of 2006 with no discussion in the Assembly and refusal of leaders/staff to say why a PDF cant be provided.

--Moving h.q. to downtown New York for 13 years at a cost of $6 million in rent with no discussion in the Assembly, isolating staff from the midtown PR/communications industry. The occupancy cost in 2009 was $755,000 or about $34 a sq. ft.

--Withholding from the 2009 and 2010 Assemblies the pay/fringes of the eight highest paid staffers as reported in IRS Form 990.

--Flouting FASB Section 958-605-2-1 that says dues must be booked over the one-year period covered (PRS books them immediately as cash, bloating net assets by at least $2 million).

--Violating numerous Roberts Rules in passing a revision of the bylaws in 2009 including use of proxies and failing to have a large re-write committee reflecting all elements of the membership (the 11-member, self-selected committee included 10 APRs; one quit to protest the lack of any face-to-face discussion of the revision with members).

--The refusal of COO Bill Murray to divulge terms of his 2010-11 contract or say whether he has a new contract.

--Barring journalists from joining the Society or having access to its audit and quarterly reports.

--Employing no more than two or three PR pros on a staff of about 50 when the major professional groups (ABA, AMA, AICPA, 4As, etc.) have numerous members of their own professions on staff, the COO always being a member of the respective profession.

A graduate of UofO with a Ph.D. in 1982, MFA from the University of Alaska in 1976, and a BA from UofA in 1974, Bivins is also the author of Fundamentals of Successful Newsletters and The Perfect Tree and Favorite Christmas Carols (Through the Magic Window).