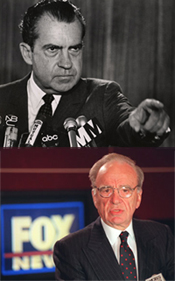 The media sadly dont have Nixon to kick around anymore, but they sure have Rupert. Let the good times roll. Watergate sleuth Carl Bernstein has officially put his imprimatur on the Rupert Murdoch/Richard Nixon comparison.

The circumstances of the alleged lawbreaking within News Corp. suggest more than a passing resemblance to Richard Nixon presiding over a criminal conspiracy in which he insulated himself from specific knowledge of numerous individual criminal acts while being himself responsible for and authorizing general policies that routinely resulted in lawbreaking and unconstitutional conduct, Bernstein wrote in the July 11 Newsweek.

Murdoch, a master of driving the gutter press into the sewer, aped Nixons ability to target a downmarket audience. Nixon rebuilt the Republican party after the Goldwater debacle by tailoring a pitch to George Wallace supporters in the south, once the traditional heart of the Democratic party. Following the Wallace assassination attempt, the GOP inherited that anti-elitist, pointy-headed professor hating, liberal baiting mob. Rupes go for the jugular and anything for a story philosophy would make Nixon, whose hard-ball political tactics aimed to destroy rather than just defeat political opponents, smile.

There is a similarity that Murdoch probably does not want to think much about: Deep Throat. Bernstein and Bob Woodward used Deep Throat to bring down the Nixon White House. It was a high point for journalism. There are 200 laid-off scoop-crazed reporters at the now shuttered News of the World. Many are specialists in the dark arts. These are the people who allegedly hacked the phones of family members of British soldiers killed in Afghanistan, Iraq and in the London bus bombing attacks. They may have the goods on News International chief Rebekah Brooks, who was at the News of the World helm when it was hacking the phone of a murdered 13-year-old girl, James Murdoch, Rupes embattled heir apparent, or the 80-year-old chief himself. Call it payback time, big time.

After his fall, Nixon re-invented himself as an elder statesman and earned the respect of some of his opponents. Time and circumstances are not on Ruperts side. A big question for News Corp.: is the rot limited to the U.K? Or even worse, does it matter?