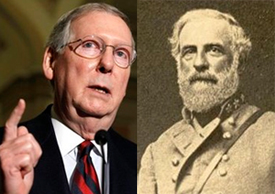 Half-hearted presidential candidate Newt Gingrich likens the deficit ceiling stand-off as a power struggle as deep and as real as anything since the Civil War. A comparison that cheapens the biggest event in American history.

Newt sees Senator Mitch McConnells plan to give President Obama a path to a $2.5T debt level increase as the second Appomattox. The way it is written I think is basically a surrender by the Republicans, he told Foxs Sean Hannity. He urged McConnell (General Lee) to have the courage to stand there and take the heat.

Meanwhile in the real world, the U.S. Chamber of Commerce, National Assn. of Manufacturers and Financial Services Forum penned a letter to Obama and his Congressional tormenters to tell them to cut the nonsense and get a deal ironed out to stave off a financial meltdown.

Nearly 500 CEOs from companies like Procter & Gamble, Alcoa and DuPont say a government default would throw the worldwide financial markets into disarray and cost a minimum of 1M American jobs.

Former history teacher Gingrich used the Hannity platform to spout some revisionist history. He depicted his government 1995-1996 shutdown as a glorious victory for the GOP. Those 26 days convinced Bill Clinton that we were deadly serious. We were not playing a game. We weren't posturing.

It was Clinton, however, who emerged victorious over the petty then-House Speaker, who shut down the Government down in a tiff after he detected a slight by the President during an Air Force One flight.

The GOP went on to lose the mid-terms in 1998 and Gingrich resigned his Congressional seat. There's no way Gingrich is going to win the GOP nod, but these media appearances are pure gold for the ego of the Newster.