Former News International chief Rebekah Brooks is using Bell Pottinger as PR rep in the aftermath of her arrest yesterday and tomorrow's appearance before a parliamentary hearing into the News of the World phone hacking scandal. 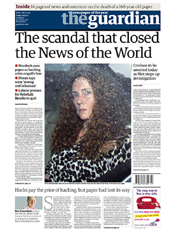 Rupert Murdoch and James Murdoch, NI chairman and News Corp deputy COO, also are slated to appear at the session. Murdoch has reportedly added Steven Rubenstein of Rubenstein Associates to his crisis team.

Parkinson says the arrest of Brooks caused the former News of the World editor "enormous reputational damage" and wants the police to "give account of their actions."

Meanwhile, News Corp. today announced that Lord Grabiner is to chair its independent management and standards committee responsible for investigating hacking, police payments and any other areas that it believes are necessary.

Grabiner has more than 40 years of commercial litigation experience and chaired the board of governors of the London School of Economics from 1998-2007.

Dinh was special counsel to the Senate Banking Committee during the Whitewater probe and to Senator Pete Domenici during the impeachment trial of President Clinton.