Edelman could not have asked for a better outcome from todays parliamentary hearings of Rupert Murdoch, the No. 1 independent firms latest star client.

This blogger is a huge fan of political theater, but the pieing of Murdoch by stand-up comic Jonnie Marbles took away from the seriousness of the phone hacking probe. Geez, it even created some sympathy for the 80-year-old media swashbuckler. That's normally a stretch. 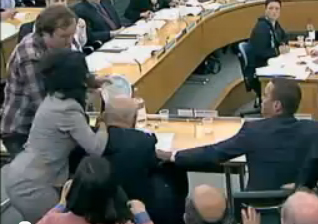 One ODwyer correspondent, however, suggested that the event had to be staged. Murdoch would have been shocked over the attack if the shaving foam assault was unexpected, said the odwyer fan via an email sent following the assault that leads much of the current coverage of the hearings.

After a short-break in the proceedings, a composed and jacket-less Rupe resumed his testimony. Conservative MP Louise Mensch praised Murdoch for having a lot of guts to come back. She then pitched a softball that Murdoch hit out of the park. Mensch asked if the News Corp. chief considered resigning. Murdoch responded that hes the best man to clean up the mess.

Earlier in the hearings, the table-tapping Murdoch appeared unsteady during what he called the most humble day of my life. His son, James, tried to bail out forgetful and hesistant dad a couple of times, but was rebuffed by members of the committee. James, who chairs the British newspaper group, also told his dad to stop pounding on the table.

The pie enabled Murdoch, who told the panel that he is absolutely shocked, appalled and ashamed over the activity of the now shuttered News of the World, to wrap up the hearings on a high note. Labour MP Chris Bryant, a leading critic of Murdoch, blasted the shaving cream attack as despicable. He believes not even arch-foe Murdoch deserves to be treated in such a manner. News Corp. stock rose 6.5 percent to $15.94 after the hearings.

U.K. Prime Minister David Cameron,who has met with News Corp. people 26 times since taking over last year, probably wishes there will be a couple of pies in Parliament tomorrow when he's expected to be grilled by Labour leader Ed Milliband for his cozy ties with Team Murdoch.