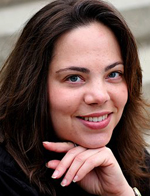 As with any new technology, PR people need to adjust to using it for business purposes. But with a new social network, like Google+, that incorporates technologies we already use (like Facebook's friends and photo uploads, Twitter's status updates, Skype's video chatting, and AIM's chat function [anyone remember this?!], etc.), all we really have to do is get used to using all of these functions in one place.

So, how are PR people going to use Google+? Not much different from the way we use all of these other technologies right now.

Aside from being able to send out a "status update" with a client's news or contest announcement, Google+ Hangout is going to be the BEST thing in the world, a PR person's new BFF!

Why? First, it allows up to 10 individual computers at a time to be on a single group chat.

Second, it incorporates YouTube videos into chat, so all of the participants can watch the same video at the same time.

And third, several people can huddle around a single computer screen, so you can increase the amount of participants to more than 10 individual people at 10 individual computers.

So, again, I ask, how are PR people going to use Google+ right now - prior to the launch of Google+ for business? Let me count the ways:

1. Video press conferences or press junkets, which will have to be carefully produced and timed, so that the conference can be repeated multiple times in an hour or over a day so that all journalists who want to hear the info and ask questions have the ability to do so (remember, only 10 individual computers a time, including the initiator.) This will also work for crisis communications when news needs to get out fast and media simply can't reach the location fast enoughjust like streaming media does right now with the use of a personal video camera.

2. Satellite Media Tours (SMT) will now be almost free, if not free!!! You can create your own SMT in Hangouts for 10 computers at a time (including the initiator) and repeat it at different times, with a Q&A session.

3. Video news releases will be incorporated via Google's YouTube, and can be directly linked to via the Hangouts feature.

4. Create press rooms for clients with photos, videos, and statements/speeches, etc. for journalists to access 24/7. Granted, only your "followers" (a.k.a. friends) will get the info for now, but that will change once Google+ for Business launches later this year. (And I wonder how it's going to affect companies like PitchEngine...Jason, what's your take?)

5. Google+ Huddle will be almost like giving an exclusive to a reporter, but not. Akin to using email, Huddle allows you to send information to only a select group; so only those you want to receive the information will.

6. Focus groups will be much faster and easier using Google+ Hangouts. In fact, they'll be almost immediate, if you need them to be.

And I'm sure there are ways I - or you - haven't even thought of yet. But if you need to convince your boss to get on board, this is a good start. And don't forget to mention that since the launch of Google+ in the last month, it has more than 10 million subscribers...and it's still only in beta.

If you haven't registered for Google+ yet, be patient. I'm sure a friend has an invite for you somewhere. If you need a primer on Google+, check out Mashable's guide.

And FYI as of today, Google+ mobile is now available on the iPhone and Android.

As always, comments and suggestions are welcome. You can follow me on Google+ at JBLH Communications.