The Washington dogfight over raising the debt ceiling coupled with Rupert Murdoch's blockbuster phone hacking scandal saga have sadly taken the medias eye off the very entertaining GOP presidential contest and its colorful cast of characters. 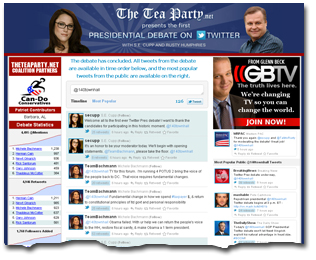 Yesterday's Twitter townhall meeting of Tea Party candidates Michele Bachmann, Rick Santorum, Newt Gingrich, Gary Johnson, Herman Cain and Thaddeus McCotter got little play. It certainly was a hoot as each candidate attempted to out duel the other in shooting down ObamaCare as the source of all evil. Taxes, environmental protection, Libya intervention and immigration took a pounding. One Tweeter fan termed the event: "The Tea Party Twitter Tour of Terror."

This blogger gets his fix on the GOP race by checking in with well-respected RedState.com editor, Erick Erickson, a good handicapper of the action. He writes the "Horserace" blog to keep political junkies updated on the Republican derby.

In todays edition, Erickson officially designates Texas Governor Rick Perry a candidate for the White House. Perrys entry means "Bachmann goes down in the polls, Pawlenty's struggles increase, Gingrich gets out and Cain is toast. Polling also shows that Perry takes votes from Mitt Romney, which must have Governor Romney troubled. Perry will be the subject of withering attacks hell have to survive." Erickson suspects Perry is tough enough to fend off those attacks.

As for Sarah Palin, Erickson doesnt think the half-term Alaska Governor is going to run with Perry in. Newt Gingrichs campaign is over. "When the Speaker of the House who led the GOP through the last major government shutdown is unable to get media attention as Washington is now on the verge of a shutdown, hes yesterdays news," wrote Erickson

Former Utah Governor Jon Huntsman, who tapped a new campaign manager today, "peaked on the day in January that Newsweek reported he might be running. Even the day he announced he got less press. He has been unable to make headway."

Bachmanns migraine story isnt going to give her campaign any headaches. She does face serious threats from "some of her former staffers who are a brood of vipers out to get her." Erickson has heard many horror stories that will be floated in the event that Bachmann gains major momentum.

Cain could have been an awesome candidate, but instead hes portrayed as the "guy who hates Muslims. Though Cain could have been the outsiders Romney with a real record of job growth, "he has no path to victory and no more shot at even the Vice Presidency."

In the bad news department: Santorum is being dropped from the Horserace and McCotter faces expulsion next week unless lightening strikes his campaign.

They won't be missed.