Arthur Yann, VP-PR of PR Society of America, says the CPA firm of PKF/New York has given an unqualified opinion about the Societys presentation of its finances. PKF says they are presented fairly.

The PKF audit and its predecessors are superficial documents used by the PRSA board to deprive members of their right to know how their money is being spent. 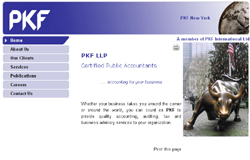 Financial reports are the sound of one hand clapping unless the creators present their work to financially savvy members and the press for questioning.

Audits are even unnecessary because the same information and even more (pay of the top eight staffers) is in the 990 tax return that is due May 15 but can be filed much earlier.

Numbers on a paper are no substitute for members working at their own h.q. and seeing how their money is spent day in and day out. This is the case at the ABA, AMA, AICPA, etc.

PRS members have been denied this since shortly after 1980 when the APRs took control of h.q., the Assembly and the governance of PRS, turning it into a hotbed of undemocratic practices.

The Committee for a Democratic PRSA drew 450 signatures last year but the three-quarters APR Assembly easily tossed the Committees plea to let non-APRs run for national board and offices for the first time since the 1970s. Only APRs are on the nominating committee and the Ethics Board and 10 of the 11 bylaws revision committee members were APR (a violation of Roberts Rules that call for a large committee representing all types of members).

PR pros were booted from the PRS staff in the 1980s and only one was leftPR director Donna Peltier. The New York chapter was evicted in 1992 and h.q. was moved downtown in 2004, isolating itself from the midtown PR/press community.

PR pros who are allowed to work at h.q. are supremely loyal to staff and board.

Further evidence of the animus of the APRs to New York is that only one national conference was scheduled there in the 23 years since 1990 (the one in 2004) while Philadelphia got the nod in 2007 and 2013.

Since APRs currently are 18% of the 21,000 membership, their dominance in PRS governance makes the Society undemocratic.

APRs use this designation to block 82% of the other members from competing with them for national officesa violation of the Guidelines of the Universal Accreditation Board that say APR can never be used for competitive purposes. The UAB board is controlled by PRS. UAB refuses to enforce this rule, saying it doesnt apply to association posts.


Should Auditors Know This Stuff?

Our answer is yes. Wall Street has a know your customer rule and so should CPA firms.

Their reports are addressed to the boards of their clients and not to the members.

They provide a clean opinion and walk away. Members and the press have no right to grill the CPA firms.

We called Ernst & Young, Deloitte & Touche and Sobel & Co. in previous years but got nothing but the cold shoulder.


Standing of CPAs Has Collapsed

CPAs have come under a lot of fire in recent years from critics such as Floyd Norris of the New York Times, who headlined on Sept. 11, 2009: Accountants Misled Us into Crisis. He said they allowed too many off-balance sheet entries and allowed complicated financial instruments that lacked transparency.

CPAs are the new priests. We need them to speak to the government. They and their allies in Congress have bloated the tax code to thousands of pages so that almost everyone needs a CPA. Small businesses are charged $10,000-$12,000 just to be sure their tax forms are filed out properly (even though they may owe no corporate taxes).

Following the Depression, Congress created regulatory bodies such as the SEC and one aim was to create an SEC for the accounting industry.
But they accountants talked the government out of it, promising to do a good job of keeping the nations books. That did not happen.

The 2010 audit of PKF remains as nothing but a device to deprive members of access to the true spending patterns of PRS unless chair Rosanna Fiske, COO Bill Murray and CFO Phil Bonaventura present themselves to financial savvy senior members and the press for questioning.

Failure of the Society to have a deferred dues account would be one line of questioning and another would be the miniscule amounts reported for staff time on the annual conference.

This cost was hugely under-reported in the 1990s (but it was fine with the auditors).

Salaries/fringes of staffers on the 1992 conference was reported as $56,100; 1993, $59,168, and 1994, $53,084. This was laughable because past national officers said as a general rule about half the staff spends half its time on the conferencea cost of well over $1 million. Its a complicated undertaking involving 40+ exhibitors and upwards of 200 speakers. Up to 35 staffers may go the conference.

The Society decided that as of 2004 it would remove the overhead allocations for 13 categories of spending.

Removed and placed in Administration was $2,002,580 in such allocations.

Figures that were in the 2003 audit were changed.

Was this transparency? Members beefed to no avail that valuable financial information was being lost since they could not properly assess the costs of activities.

Three college accounting professors, sent copies of the 2005 audit of PRS, had plenty of criticisms of them (link, PDF).

Phil Wolitzer of Long Island University, who has given classes to reporters for the New York Society of CPAs, said the reporting is not full, fair and adequate disclosure.

Dues should be booked ratably over the course of the year as earned, said Prof. Charles Mulford of Georgia Tech.

He said this is not a grey area and PRS has not option but to do that.

They are a poor way for members to learn whats going on in their organizations and especially when leaders refuse to make any comments or explanations of the audits.