Bravo! James Murdoch, who stole the show at the parliamentary phone hacking probe on News Corp. this week, may do an encore performance.

Its certainly going to take a lot more than a one-line press release from Murdoch   I stand behind my testimony to the Select Committeeto put out the firestorm ignited by two former News International execs who said Murdoch Jr. was less than honest during his testimony. 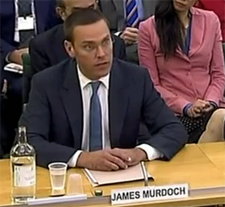 A stunned John Whittingdale, who presided over the extremely entertaining culture, media and sport committee hearing, plans to write a letter next week asking Murdoch about charges brought forth from Colin Myer, ex-News of the World editor, and former NI legal manager Tom Crone. They claim Murdoch know about phone hacking evidence.

Tom Watson, the Labour MP who was most critical of the Murdochs during the panel, wrote his own letter to Scotland Yard urging it to investigate this most significant moment of the whole hacking scandal. Scotland Yard, which is dealing with its own entanglement in the News International affair, is considering Watsons request, according to the Guardian.

The other chief Murdoch tormentor, Labour MP Chris Bryant, wrote a letter to News Corp.s independent directors to rap a complete failure to tackle the original criminality at the company" and the lackadaisical approach to such matters would suggest that there is no proper corporate governance within the company.

At the committee hearings, James came across as a much steadier hand than his dad, Rupert. That hand and the other are going to be full dealing with the U.K. probe and the U.S. Justice Dept., which is preparing subpoenas as part of its investigation of the News Corp. mess. Who is going to run the News Corp. ship?

James may have to follow the lead of Rebekah Brooks, the former News International head, who stepped down to devote her full-time energies to combating various hacking allegations.

One thing is for sure, the News Corp. scandal is certainly the gift that keeps on giving.