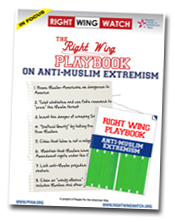 That release is sandwiched between the horrific slaughter in Norway by a fanatic who fears that a guy named Mohammed is going to occupy the palace in Oslo some day, and Wednesdays resumption of Republican Rep. Peter Kings ongoing carnival of Muslim-bashing.

The Long Island Republican is convinced that 99 percent of Americas population is threatened by the one percent that identifies itself as Muslim. Get a life, Petey. Cancel your sideshow of hatred.

PFAW says right-wingers use Muslims as a scapegoat for any number of national fears and frustrations, according to Michael Keegan, president of the group. The Report shows how they deny the validity of Islam as a religion; warn of a ludicrous creeping Sharia plot to take over Americas judicial system; argue that Muslims do not enjoy First Amendment rights; justify stripping freedoms from Muslims to defend liberty, and claim an unholy alliance between Muslims and leftist groups.

The Report notes that Republicans and anti-Muslim activists have gained mileage by playing into the phony story about President Obama being a secret Muslim. It quotes former Arkansas Governor and Presidential candidate Mike Huckabee saying:


We may have a President who has some fundamentally anti-American ideas that may be rooted in a childhood that was different from the experience of most Americans, because unlike Obama our communities were filled with Rotary Clubs, not madrassas.

PFAW believes accusations that Muslims are subverting the Constitution and taking over the country have helped to foster anti-Muslim hostility, reflected in the rise of anti-Muslim prejudice and increased attacks on Muslim-Americans and their houses of worship. We are supposed to be a lot better than that.

Tied in with hatred of President Obama, fear of religious diversity and hostility toward immigrants and gays, anti-Muslim rhetoric and paranoia has become a mainstream, if not ubiquitous part of the conservative movement and the Republican party, according to the Report.