President Obama got it wrong last night. He said millions of Americans work all day, go home bone-tired and then turn on the news to watch the three-ring circus debate about how much money is needed to slash from government spending so Wall Street investors wont have to fret about whether the U.S. is going to lose its Triple-A credit rating. 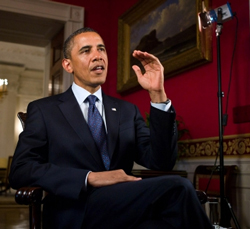 Geez, how Republican can the president get? Note to the president: Millions of Americans wish they had a job so they can go home bone-tired.

There was no mention of jobs during last nights presidential talk about his contest with John Boehner over how much government spending to slice. Those lost future dollars would go a long way in putting America back to work.

Assuming that he has one, its hard to figure out the presidents strategy. Why does he play Compromiser-in-Chief to Republicans who are hell-bent on getting him out of office?

When it comes to fending off Republican threats to Americas middle-class, Obama doesnt blink, its eyes closed shut. The Democrats were on a roll in the aftermath of Congressman Private Ryans plan to transform Medicare into a voucher system.

That momentum is gone as Obama plans to slash Medicare and Social Security in his grand bargain deficit reduction bid.

Obamas advisors may think a bargain is needed to entice independent voters to pull it for Barry in 2012, but its a grand sell-out of Democrats seeking to re-take Congress or at least save their own political hides.

The cast of nobodies that is running for the Republican presidential nomination provides rich entertainment. This blogger cant wait until Texas Governor Rick Perry and Americas Mayor (give me a break) Rudy Giuliani enter the fray.

The Democrats, however, could use their own primary fun. Vermont Senator and national treasure Bernie Sanders believes it would be a good idea if President Obama faced some primary opposition. I second that motion.

The 70-year-old Brooklyn-born Bernie would make an ideal protest candidate to shame Obama into acknowledging the job crisis facing the U.S. Bernie, however, wouldnt last the distance.

A more substantial challenge to Obama could be mounted by Secretary of State Hillary Clinton or former Vice President Al Gore running on an environment jobs platform.

A Clinton or Gore challenge would make us all forget about Mitt Romney and the rest of the GOP Presidential wannabes. It would also focus the nation on its No. 1 challenge.

When it comes to the need to create jobs, the president just doesnt get it.