After much public criticism, the California Milk Processor Board has cancelled its most recent ad campaign, Everything I Do is Wrong.

The campaign, introduced on July 11 by the Milk Board and ad agency Goodby, Silverstein & Partners (part of the Omnicom Group), focused on the claim that the calcium in milk helps reduce PMS symptoms. 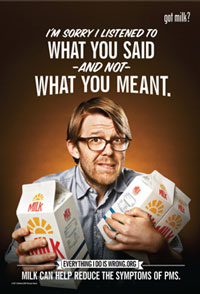 The campaign featured a series of print ads showing men holding cartons of milk, apologizing for listening to what you said and not what you meant or for not reading between the right lines, as well as a website for men that gave advice on how to deal with menstruating wives and girlfriends.

In response to numerous complaints that the campaign was sexist  including a petition on change.org started by Ms. Magazine  the Milk Board has pulled the ads. The petition, which received 9,339 signatures before it was closed on July 21, called the campaign overwhelmingly sexist, playing on the tired stereotype of menstruating women as volatile monsters.

The Milk Board has also replaced the original website Everythingidoiswrong.org with GotDiscussion.org and released the following statement:


Over the past couple of weeks, regrettably, some people found our campaign about milk and PMS to be outrageous and misguided  and we apologize to those we offended.

Others thought it was funny and educational.

It has opened up a topic that affects women, of course, but also relationships.

The new site also includes a representative sampling of comments made about the campaign, ranging from Ads were funny, artistically pleasing, and definitely over-the-top to These ads are bad enough to cause lactose intolerance.

Steve James, executive director of the Milk Board, told the New York Times, Taking down everythingidoiswrong.org is not a failure in any way. I dont see it as ending it or pulling the plug. We accomplished what we set out to accomplish.

In a blog entry for Ms. Magazine, Amy Borsuk called the Change.org petition a success but suggested that the Got Discussion website is a flimsy stand-in for a real apology and a real end to the campaign.

She continued, While discussion is certainly healthy, the Milk Board is still using this campaign to sell its productnow its just using the controversy rather than the ads themselves.

She also expressed concern that the discussion on Twitter (under the hashtag #gotdiscussion) and on the Got Milk Facebook page  which is seemingly unmoderated  would quickly result in even more sexist remarks.