It took a decade, but Im getting to like New York Mayor Mike Bloomberg, who is putting his money to work to solve problems left unsolved by the politically paralyzed Congress. 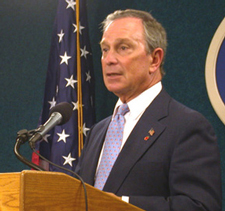 During the July 21 announcement of the Bloomberg Philanthropies donation, tell-it-like-it-is-Bloomie said:


"If we are going to get serious about reducing our carbon footprint in the United States, we have to get serious about coal. Ending coal power production is the right thing to do, because, while it may seem to be an inexpensive energy source, the impact on our environment and the impact on public health is significant. Coal is a self-inflicted public health risk, polluting the air we breathe, adding mercury to our water, and the leading cause of climate disruption."

Those words are right on target.

Bloombergs cash will fund a big chunk of the Sierra Club's four-year $150M budget that aims to retire a third of the nation coal plants by 2020, replacing them with clean energy facilities. Beyond Coal, which claims to have stopped construction of 150 coal plants, works with local communities to lead from the front while Congress continues to watch from the back, according to Bloomberg.

Earlier this month, Bloomberg Philanthropies announced a $24M grant to tackle top-priority problems in Atlanta, Chicago, Memphis, New Orleans and Louisville. For instance, Atlanta is earmarking its money to combat homelessness, while Memphis plans to put the cash to reduce handgun violence.

Bloombergs stock is even on the rise in the Big Apple. A Quinnipiac University poll says his approval rating hit 45 percent this month, up from 40 percent in May. A solid 64 percent of respondents say they personally like the guy.

Bloombergs ability to get things done stands in stark contrast to the dysfunctional Congress and the Compromiser-in-Chief. Theres no way Bloomberg would have put up with the debt ceiling follies that have damaged America's standing in the world. Bloomberg sits pretty as talk of a third party to challenge the Democrats and Republicans picks up steam. His philanthropy has extended the Bloomberg brand well beyond the borders of NYC.

Bloomberg is the real deal compared to his predecessor Rudy Giuliani, who falsely fashions himself as Americas Mayor.