Laura Neff-Henderson, president, Blue Ridge chapter of PR Society of America, brought up the topic of the high pay of top Society executives yesterday at the morning teleconference for Assembly delegates on the proposed $30 dues hike.

Neff-Henderson said her chapter members had asked her about the Jack ODwyer allegations about executive pay at the Society and asked her if the information is correct?

Fiske said, The information you are referring to, I have not seen it. If its like the information sent in the past several years Fiske dropped the subject with those words and talked about a survey five or six years ago of what other associations were paying their COOs.

She said the survey found that PRS was underpaying its own COO.

Organizations in the $10-$20 million range were looked at, she added. [PRS income is in the $9-$10M range lately after reaching $12M]. She also said the board has reviewed COO Bill Murrays pay and has consistently decided that his performance is excellent.

PRS announced at noon today that Murray has a new three-year contract to December 2014. Members will learn his 2012 pay when PRS files its IRS Form 990 in 2013, the Society said.

All would agree, she said, that we would want to keep someone whose performance is excellent.

Neff-Henderson was told to feel free to call Fiske for a private conversation on executive pay.

Neither he nor the board will disclose terms of his 2010-11 contract.

We applaud Laura for daring to bring up the subject of high staff pay at PRS. She is president of a chapter which has about 100 members and president of Tipping Point Communications. She was previously a reporter for the Progress-Index, the Southwest Times, and News Messenger, and was a PI officer for the superintendent of Petersburg public schools, Petersburg, Va.

Fiske says she is unfamiliar with our reports on PRS staff pay but we have sent blogs on this not only to her but to nearly 100 chapter presidents numerous times in recent weeks.

Were trying to relieve PR staff and chapter presidents of the ability to say, I dont know.

Neff-Henderson, who has a BA in journalism and PR from Radford University and a masters in English from Virginia Commonwealth University, lives with her husband and four children in Disputanta, Va.

Fiske was sent a complimentary subscription to the ODwyer NL recently but returned the copies marked Return to Sender in large handwriting. 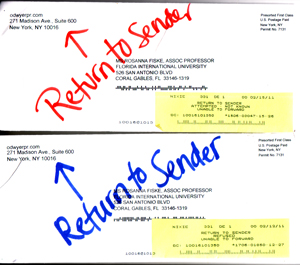 The Society should not compare itself to the major professional groups such those for lawyers, doctors, CPAs and associations.

Their staffs are always headed by one of their own professionals whereas Murray is not a PR professional.

He is in bald violation of the Ethics Code of the Society which forbids blackballing of media or reporters. He delivered such a blackball to us in our own office on March 19, 2010.

PRS is out of step with the major professions because its board is not subordinate to its Assembly which is the case with the other professional groups.

An attempt in 2006 by Central Michigan to bring the PRS bylaws in line with the ABA and AMA was soundly defeated.

The assemblies (houses of delegates) of the major professional groups all meet at least twice a year and are run by their own elected officialsnot the boards.

These groups and the Intl Assn. of Business Communicators, a close cousin of PRS, defer half or more of their dues income while PRS books dues as cash in violation of FASB rules.

Renewing Murray saddles the Society with a $2.4 million obligation over the next three years since he will no doubt keep appointees CFO Phil Bonaventura ($221K in 2009), and VP-PR Art Yann ($137K).


Assembly to Be 'Dis-Assembled'

Just about the worst news coming out of yesterdays tele-talks was that the Assembly Oct. 15 in Orlando will be dis-assembled, the 270 or so delegates sent off into 20 or more different rooms to discuss PR topics.

PRS leaders/staff, in exhuming an Assembly-controlling device from the 1990s, are scrapping the bottom of the barrel on how to occupy the delegates and keep them from asking tough questions such as why cant the members directory be PDFed and how long are members supposed to pay nearly 60% of income to the staff when it should be 35-40%?

Last year the delegates spent almost the entire afternoon discussing what is the meaning of PR. They were the only people in the U.S. who had any doubt about what PR is.

The year before was spent on an abortive re-write of the bylaws. Roberts Rules were trampled on to the extent that all articles adopted are subject to challenge indefinitely because proxies were used.

Such use violated New York State law that says proxies are banned if a group has a specific bylaw against them. That specific bylaw came about when the Assembly adopted RR as its parliamentary authority.

Adoption of RR shall satisfy any state demand for a specific rule against proxies, says RR.

Only a few of the new articles were ever brought before the Assembly and only a couple of vote tallies made it into the minutes although RR requires that all tabulated votes be in the minutes.