President Obamas surrender, cave-in, and capitulation to Republican demands for massive spending cuts without a nickel of revenue-generating tax hikes on the wealthy or elimination of corporate tax loopholes in return for a debt ceiling deal certainly will cast a pall over the planned celebrations of the presidents 50th birthday this week. 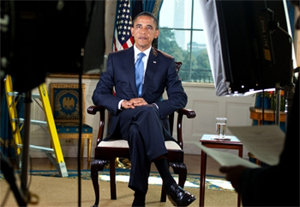 The $64K question: Will anybody show up to party?

Obama for America organized the nationwide network of house parties August 3 to acknowledge the big day. One earnest host of a bash in Brooklyns Lefferts Garden neighborhood tells prospective party-goers to bring your own plates, cups and cutlery so that we can minimize waste. The highlight of the evening is to be a special video conference with the president, who will be spending the big day in Chicago with family and fund-raisers.

Obama for America claims its mission is to lead in building this organization on the ground because the president is focused on the job we elected him to do. Really?

Thats big news for friends of Obama. His supporters say jobs, not debt reduction, is what they want him to be focused on. Nationally, a CBS poll conducted in June ranked job creation (53 percent) as the top issue facing the country. Deficit reduction logged in at seven percent.


Yet, the president has allowed the GOP, Fox News, right-wing think tanks and Corporate America, which is shamefully demanding tax cuts while hoarding billions in cash, to shift the focus from jobs to debt. They then used the The Know Nothing (Tea Party wing) of the Republican party as a useful tool.

The new Know-Nothings were willing to throw the worlds economy into financial chaos if their crazy demands for spending cuts and a balanced budget amendment were not met. A timid president left Tea Partiers unchallenged. The threat finally led the Administration and Congressional leadership to craft the debt ceiling compromise that left Obama supporters hardly in the mood to party.

This blogger expects the only birthday mirth this Wednesday will be at the New York Stock Exchange rally organized by the Americans 4 Justice organization. Unfortunately for Obama for America, the revelry wont come from members of the Americans 4 Justice group. It will come from the investment bankers who will toast the saving of the Bush era tax cuts that were shamefully extended by the president and the Democratic Congress last year.

As House Minority Leader Nancy Pelosi said July 26, We get the sacrifice. They share the wealth?