What was President Obamas crackerjack PR team thinking today? His Rose Garden statement on the debt ceiling accord was a huge blunder. 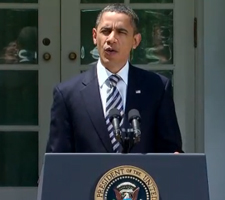 Obama appeared to be in an alternative universe when he said:


We cant balance the budget on the backs of the very people who have borne the biggest brunt of this recession. We cant make it tougher for young people to go to college, or ask seniors to pay more for health care, or ask scientists to give up on promising medical research because we couldnt close a tax shelter for the most fortunate among us. Everyone is going to have to chip in. Its only fair. Thats the principle Ill be fighting for during the next phase of this process.


Thats exactly what just happened. Under the debt ceiling deal, the poor and middle class will bear the brunt of the cutbacks. Despite presidential dreams of an opposition party working with him on reforming our tax code so that the wealthiest Americans and biggest corporations pay their fair share, more misery is on the way.

The President also said: "This compromise requires that both parties work together on a larger plan to cut the deficit, which is important for the long-term health of our economy. Hes got that wrong. The potent Tea Party wing of the GOP has no interest in cooperating with the President.

Period. It budged not one inch during round one and was willing to throw the countrys credibility under the bus by allowing the U.S. to default on its financial obligation. Gary Younge, wrote in The Guardian on Aug. 1: The Republican partys inability to bring its raucous base into line has cost it, and the country, dear. The point of brinkmanship is to take you to the edge, not over it.

His point: the GOP is no longer a political party.

Obama sticks to the illusion that negotiation is possible. Thats downright silly. The GOP goal is to defeat Obama every step of the way. Mitch McConnell made that plain shortly after the president took over. Time after time, the president negotiates with Republicans, who stonewall until he caves. It works for the GOP and diminishes the president who is looking smaller and smaller each day.

The famous definition of insanity that is attributed to Einstein (Insanity is doing the same thing over and over again but expecting different results." ) neatly sums up Obamas relationship with the Republicans.

As for Obama's liberal base, it has hit the road. On the political front, the president is a very lonely man.