Most respondents in an industry survey think that the term "PR" will be dropped in the next decade, according to research by the International Association of Business Communicators and Ogilvy PR Australia.

The survey found that 76% see "PR" disappearing in favor of the industry calling itself "communications" pros or agencies. The shift from "PR" departments to "corporate communications" began on the client side on a large scale over the last decade, but agencies have been slower to make the move. 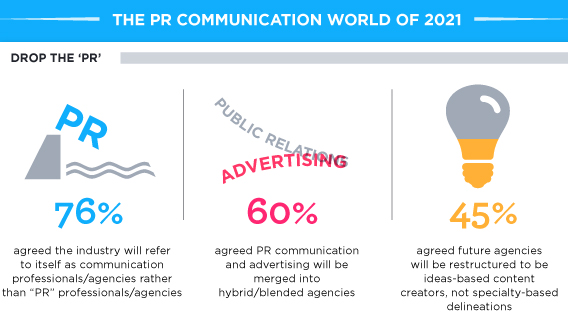 A majority of respondents (60%) in the survey also said PR and advertising will be merged into hybrid agencies in the near future.

But the nominal shift in PR will be underlined by a tactical shift as well, according to the study. Thirty percent said that the most important measure of success for PR activity in 2021 will be influence of audience reached, compared with only 23% who cited reputational change and a paltry 2% who cited opportunities to see a message.

Graham White, a managing director for Ogilvy unit Howorth, said the time of touting products and services to gain column inches is running out. "This approach is partly driven by budgets, and because PR is not regarded as a strategic discipline," he said. "The longer that continues, the quicker PR will lose relevance."

The phasing out of "PR" will also be a cosmetic move, according to at least one respondent to the survey.

A PR master's student, Nidhi Paul, offered a more dire outlook and warning for the next decade: "The PR industry will face a crisis of credibility in the coming decade. Astroturfing, creating fake news and false marketing has all reinforced the mistrust and negative image of the PR industry. This will ultimately make it harder for PR practitioners to influence public opinion in the future. While the truth may not always set you free, packaging the truth to make it palatable for the target audience is what public relations should be about."

Ogilvy sanctioned the study to mark its 10th year in Australia.