Todays White House daily snapshot features a picture of President Obama sitting at a table at the Good Stuff Eatery with his debt ceiling negotiation team.

Its supposed to be a celebration. The president treated staffers to lunch for their round-the-clock effort to cut a deal with the Republicans. The caption reads Burgers with Obama, which begs the question: Wheres the Beef? The picture was snapped either before or after lunch. 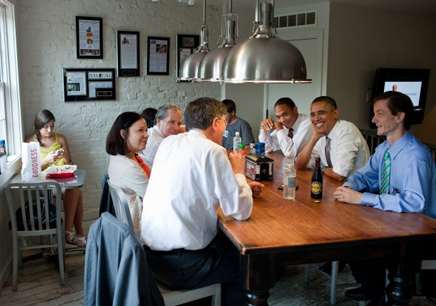 The White House missed a golden opportunity. It should have shown the president chowing down on Good Stuffs signature Prez. Obama Burger, which has bacon, onion marmalade roquefort cheese and horseradish mayo sauce. What better way to humanize the president? USA Today reports there was a burger, fries and salad placed before the president. An extra plate of fries was on the table. Did Obama tackle the food?

Last month, First Lady Michelle Obama ordered a burger, fries, chocolate shake and diet coke at the new Shake Shack in D.C. It was a feast of more than 1,700 calories, according to the Washington Post. As leader of the Lets Move campaign against child obesity, she drew some criticism. The First Lady survived that mini-tempest.

Another daily snapshot puzzler: Dont you think the teen-ager sitting less than 15 feet from the President should be a little excited about being in his presence. Its not every day that the leader of the free world swings by for a bit of lunch at your favorite hamburger joint.
The girl is texting away as if she even hasnt noticed Obama.

As the father of two teen-aged girls, this blogger understands the power that texting has over young people, but give me a break.

One saving grace for Team Obama, she appears to be under the legal voting age.