The District of Columbia Housing Authority, D.C.s top landlord and one of its largest developers, is dangling a strategic communications contract to buff its image and build support for authority programs and public housing. 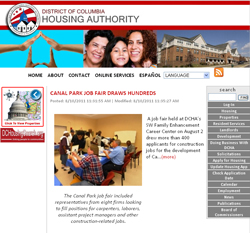 The DCHA, which was put in court-ordered receivership from 1995-2000, issued an RFP on Aug. 8 for research and strategic communications planning to expeditiously develop and implement a PR plan.

The authority manages 8,000 apartment units, runs a large voucher program, and works with private landlords to house 12,600 households each year. It expects $300M per year in federal Housing and Urban Development grants.

Past efforts included a PR audit several years ago that found stakeholder impressions were based on pre-receivership problems. A website overhaul was done in 2010 and two external newsletters were launched to foster information flow and outreach.