Interpublic has unloaded half of its five-year-old stake in Facebook for $133M, a significant return on its initial $5M investment.

The advertising and PR conglomerate bought a small stake of less than one-half of a percent of FB in 2006. 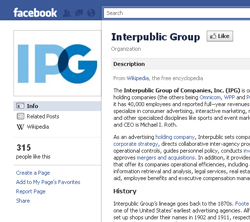 CEO Michael Roth said an attractive opportunity to divest a portion of its position presented itself as he also announced that IPG would spend $150M buying back stock, expanding on an existing $300M re-purchase program started back in February.

Based on the sale of IPGs stake, Facebooks valuation is pegged around $66B.

Roth said Facebooks ubiquity has meant the strategic value of our initial investment has moderated, while the financial value of that stake appreciated significantly.

IPG did not disclose the buyer of its stake.

The company first divulged the stake in a footnote to its 2010 annual report, noting it had become big enough to require disclosure to the SEC.

From time to time, we make investments in privately held companies that we believe may be of interest to the advertising and marketing sector," IPG said in that report. "Certain of these investments, the most significant of which is Facebook, have significantly appreciated compared to their cost, but there can be no assurance as to the terms on which we would be able to dispose of any such investment."