Two former Hill & Knowlton Australia executives have apologized to the firm for poaching clients and staff, part of an out-of-court settlement after H&K brought legal action against them and Edelman, where they both now work.

Michelle Hutton, now Australia CEO for Edelman and former Australasia CEO for H&K, and Anna MacIntosh, consumer marketing director at Edelman who previously led H&Ks Australia consumer practice, have admitted in letters to H&K that they were involved in soliciting certain clients and staff of H&K while employed at Edelman. 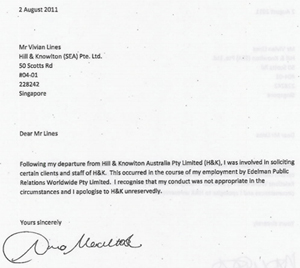 I recognize that my conduct was not appropriate in the circumstances and I apologize to H&K unreservedly, each said in apology letters to H&K's Asia-Pacific president and CEO Vivian Lines.

Dave Robinson, president and CEO of H&Ks Australia, Middle East, Africa and South/Central Asia region, told ODwyers the complaint brought in Supreme Court of New South Wales was resolved out of court substantially in the favor of his agency. He noted apology letters from both executives were part of that deal and added that the actions they admitted to performing run counter to Edelmans own ethics code.

In a statement to ODwyers, Hutton said she is pleased that the legal proceedings against her, MacIntosh and Edelman have been concluded.

A range of allegations were made against each of us, and we have jointly defended our conduct and position in relation to these matters very strongly, she said. We look forward to putting the proceedings behind us and getting on with business at Edelman Australia.

H&K is part of WPP. Edelman is independent.