New Mexico is expected to review its tourism PR and advertising contracts via RFPs this fall as a new tourism secretary seeks to put her stamp on the states marketing efforts. 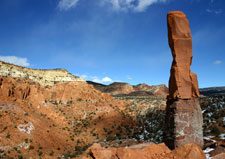 Monique Jacobson, a former marketing and branding exec for PepsiCo who was named state tourism secretary in January, said pacts will be reviewed with a national search. RFPs are expected by the fall.

"As we work to make our state an even more attractive destination for visitors from across the country and around the world, it's important that we have the best possible partners to help us create and implement a successful long-term plan for New Mexico tourism," she said, noting that current contracts were up for renewal at the start of the 2012 fiscal year, when they were extended three months until the end of September 2011.

Karyl Leigh Barnes, senior VP/partner at DCI, told O'Dwyer's the firm is planning to respond to the RFP.

Jocobson is concerned with New Mexicos ranking as 24th on a list of places people want to visit, noting she thinks it should be among the top three in the U.S.

Publicis M&C Saatchi is the incumbent for New Mexicos $2.5M-a-year advertising account. PR billings are set at $120K this year.