President Obama did the right thing in not demanding that Congress give up its recess and get to work on fixing the economy through August.

C'mon, admit it. Did you really want to hear Republicans and Democrats fighting like dogs during the dog days of summer? 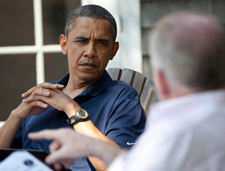 The presidents inaction provided the nation with a much-needed respite from the craziness on Capitol Hill. The recess gave Congressmen time to get in touch with their constituents. It also allowed media coverage for the very entertaining race for the GOP presidential nomination.

The president is using his working beach vacation to put finishing touches on his jobs plan, which is focused on extending unemployment benefits, maintaining payroll tax cuts and spending for transportation projects.

That program already has been savaged. The Wall Street Journal editorial board last week questioned how giving cash to the unemployed is going to stimulate the economy. The worthies at the WSJ believe unemployment benefit recipients are discouraged from seeking work because they enjoy the luxe life.

My bet is that the WSJ edit board doesnt hang out with any of the 448,303 New Yorkers who get the maximum $405 weekly unemployment check. That sum doesnt go very far in the Empire State.

Obama is going to unveil his economic plan after Labor Day. Lets hope the cooler weather will encourage cooler heads in Congress. The nations economic future depends on it.