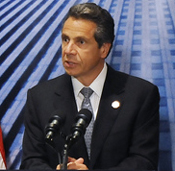 The "New York Open for Business" campaign will get the message out to companies throughout the world that New York is a premier place for business to invest and grow, said the Governor, who assumed office in January.

The push includes an RFP for a major communications firm to help create a bold new campaign, across all media, to promote the advantages of doing business in New York, he said. The Empire State Development Corporation is handling that process. [Link to RFP]

Cuomo noted that the massive job flight that has devastated communities throughout the State has given New York an image of having one of the worst business climates in the nation.

The Democrat believes New York is becoming more business-friendly in the aftermath of the deal to balance its budget without a tax hike, ethics reforms and launch of regional economic business councils. The state also boasts of an educated work force and strong network of universities and colleges.

A $10 to $50M multi-year communications program from the Empire State Development Corp. will be a major component of the open for business drive.