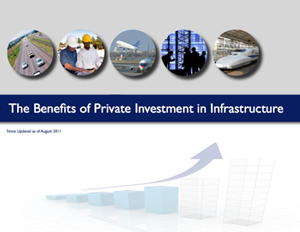 Before lacing on the gloves to spar over ways to bolster the hard-pressed economy, Democrats and Republicans should take a look at the Benefits of Public Private Partnerships report that was released by Washington-based Sphere Consulting PA firm earlier this month.

Jim Courtovichs firm finds there is a pot of $250B available globally for infrastructure projects, up 40 percent from 2010. The report predicts that amount could be leveraged into a whopping total of $650B for U.S. roads, tunnels, schools and bridges. A private/public sector partnership could add 1.9M jobs for the hard-pressed construction sector, cutting the unemployment rate by 14 percent.

The Sphere survey was created in conjunction with companies that have a strong vested interest in putting money into big bang projects. That group includes Morgan Stanley, Merrill Lynch, Citi Infrastructure Investors, Carlyle, Macquarie Group Ltd., UBS and Credit Suisse. That said, Sphere does offer a roadmap to infrastructure spending that may win support from Republicans and Democrats who are tired over the same old squabble over government spending and tax/regulatory cuts.

Prior to setting up Sphere, Courtovich advised venture capitalist Ted Forstmann and John Walton, a member of the founding family of Wal-Mart. He also counseled Republican Senators Phil Gramm and Warren Rudman.