The failure of the Obama administration to promote the benefits of the Patient Protection and Affordable Care Act to the legions of uninsured Americans is one of its biggest PR blunders.

[The presidents recent unfortunate use of the word pivot to mark a new focus on job-creation is another bone-headed PR move. That's a "plunge" that should have been taken two years ago.] 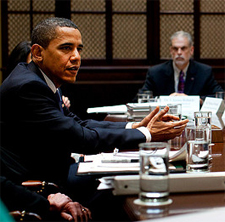 The August tracking poll of the Henry J. Kaiser Family Foundation clearly shows the presidents communications failure on the healthcare front. It finds that almost half (47 percent) of uninsured people aged 18 to 64 believe the Affordable Care Act wont make much difference in their lives. They are way off base.

The new law will cover 32M uninsured Americans by the time it is fully implemented. Less than a third (31 percent) understand that the healthcare law will help them.

Those sorry numbers are an indictment of the White Houses lousy PR to promote its landmark accomplishment. It's like a baseball player hitting a long home run into the upper decks, and then failing to run the bases.

Heres more from Kaiser making the case for PR. Less than four-in-ten Americans (39 percent) have a favorable view of the ACA. Forty four percent have an unfavorable viewpoint. If President Obama begins to educate Americans about future coverage of the uninsured, ACA favorability would soar. His re-election would be assured. The uninsured are a natural constitutency for Obama, ripe for the picking.

People who are busy in their everyday lives (and who are being bombarded by a highly spun, confusing debate about the ACA), will only understand what a complex law like this does when it is tangible for themwhen they either get the benefits themselves, see family members and friends benefiting, or see news reports about how the law is working after it is implemented. When there is real insurance coverage available for people who dont have it, they will become more aware of it.

Thats all well and good, but Team Obama doesn't take on those who lie about the healthcare law. Eric Cantor's crowd is more interested in destroying the presidency, rather than insuring Americans.

ACA coverage technically becomes available in 2014. It will be perhaps another two years before outreach and full enrollment takes place. If Rick Perry or Michele Bachmann, knocks off the president in 2012, ACA will be put down. Barack Obama better get the word out about how ACA will insure the uninsured, even if they are card-carrying members of Tea Party USA, before it is too late.

The clock began ticking a while ago.