Politicians aren't the only ones suffering image woes of late.

The combined advertising and public relations industry suffered a reputation hit in an August Gallup poll, which asked the public's views on various sectors of business.

The ad/PR sector suffered a five percent gap between 32% positive and 37% negative, with a 29% neutral rating.

That's a lower positive than electric and gas utilities, sports, and accounting, according to Gallup. The public also as a higher negative view of ad/PR than the auto sector, retail and the telephone industry.

Over the past decade, Gallup found the public's positive view of advertising and PR has declined by 6%, from 38% in 2001 to 32% today.

A public backlash against government is evident in the latest Gallup numbers as the federal government's negative rating hit 63% with only 17% reporting a positive view, an all-time low. Oil and gas also drew sharp negatives at 64%, as did real estate (52%) and healthcare (55%). 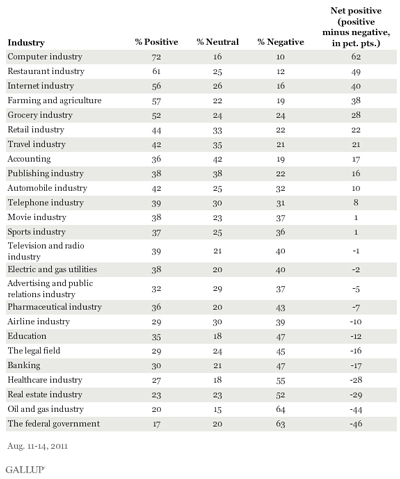 Full table is at gallup.com. The polling was conducted in mid-August.