Summers Eve, owned by Fleet Laboratories, recently launched a multimedia campaign for its feminine hygiene products titled Hail to the V, an effort met with accusations of sexism and racism, especially online.

The campaign included a redesign of the Summers Eve website and two series of ads. The first was a three-part set of spots featuring feature a black, white, and Latina talking hand (meant to represent a womans vulva). The second series focused on historical female archetypes, such as Cleopatra and Helen of Troy, and included both video and print ads. 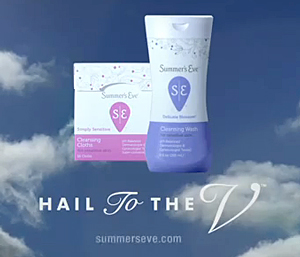 Shortly after the July 2011 launch, Summers Eve pulled two of the videos in response to accusations of sexism and racism. Many criticized the talking hands for perpetuating stereotypes about black and Latina women and both series of ads for reducing women to sexual objects.

Although Stan Richards, founder of The Richards Group, the Texas-based agency behind the ads, first defended the campaign, the ads were later pulled.

Much of the criticism Summers Eve received on the ads occurred online  on blogs, Twitter, on the wall of the Summers Eve | Hail to the V Facebook page and in a Change.org petition entitled Tell Summers Eve to End its Sexist & Racist Ad Campaign. However, the company has little to address this issue via social media.

After the ads were pulled, Richards PR executive Stacie Barnett said in a statement to Adweek, The decision to take the videos down is about acknowledging that there's backlash here. We want to move beyond that and focus on the greater mission. She added, We do not think they are stereotypical, nor did we obviously intend that. However, its a subjective point of view. There seems to be an important perception out there that they may be.

A link to this article was posted by the official Summers Eve Facebook page, but no other official mention appeared on the companys website or anywhere else online.

Summers Eve also came under fire last year for an advertorial in Womens Day that suggested that starting off every day using feminine hygiene products was the first step to getting a raise at work.

In response to criticism, Summers Eve pulled that ad and created a Twitter account @Eve_Cares to field complaints. Eve_Cares was deleted this July, shortly after Twitter users started directing complaints about the new campaign to the account.

Their other official Twitter account (@FleetSummersEve) has sat unused since last summer until it apparently was taken over by spammers this August.

The California Milk Processor Board also pulled a series of controversial ads in July 2011, but unlike Summers Eve, they took full advantage of the benefits of social media.

The Milk Board replaced the campaigns original website with GotDiscussion.org and offered a representative sampling of comments made about the campaign. The site also encouraged people to join the discussion both on Facebook and on Twitter under the hashtag #gotdiscussion.

By ignoring social media, Summers Eve has ultimately missed out on the opportunity to positively spin this scandal.